With an area of 4388 km2, Haute-Savoie (74) is a hiking area par excellence with its many massifs at both medium and high altitude. Haute-Savoie includes the following main massifs:

In this regard, you will find below a selection of hiking routes that I have been able to do in Haute-Savoie. Each hiking itinerary is carefully documented with a description, a route and photos. Feel free to send your comments or remarks by email or at the bottom of the corresponding articles.

Mont Ouzon and its rocks remain a very beautiful point of view on the Chablais Alps and the Mont Blanc Massif as well as on Lake Geneva. The climb is quite harsh at first in the forest but gets smoother when reaching the Col de Planchamp

On the surface of some limestone soils occurs an erosion phenomenon called “lapiaz. ” It is a chemical (and not mechanical) action that causes this erosion, the result of which is the sculpture of the rock in more or less deep grooves. Depending on the degree of slope

Lac Blanc is one of the greatest classics of the Chamonix Valley that will make hikers discover a grand panorama of the beauty of high mountains. The itinerary I propose describes a loop that leads from Lac Blanc to Lacs des Chéserys

Dominating the ski resort of Avoriaz located at the southern end of the Chablais, Hauts-Forts is an ideal goal where one strolls into a desert environment after the winter bustle. The impression created by the scene is part of a double contrast

Situated in the heart of Chablais Massif between the imposing Dent d'Oche in the north and Cornettes de Bise in the south, the Lac de Darbon represents an agreeable hiking objective. The itinerary describes a circuit reaching the Col de Bise,

Aiguillette des Houches is a magnificent stroll in the heart of the Mont-Blanc Massif that takes part of the Tour du Mont Blanc. With its sumptuous views of the Mont Blanc Massif, this hike will undoubtedly remain an unforgettable

Lac de Gers remains one of the countless treasures of the Giffre Massif. From Lac des Chambres to Lac d’Anterne and Lac de la Vogealle, the massif is full of wonders for the noblest pleasure of the hiker. Situated on the other side of the Rocher des Fiz, on the site of the Grand Massif 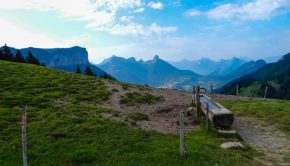