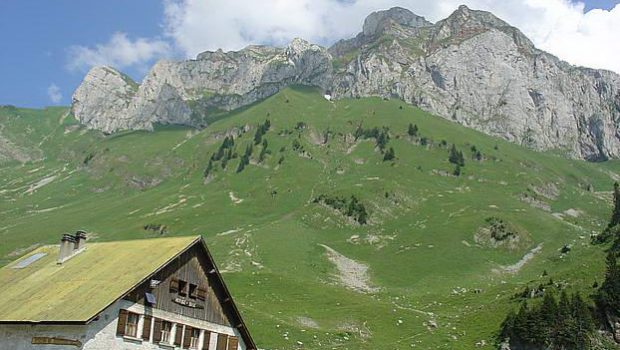 A hike classified among the must-see places in the Chablais, Cornettes de Bise offers a very beautiful panorama, but requires a real effort to reach its summit. The itinerary is indeed difficult because of the length of the route, the significant elevation gain, and a long and very steep passage that is somewhat challenging for the legs. Several exposed passages require great vigilance, especially as the holds are slippery and delicate.

The proposed itinerary describes a loop that passes through Swiss summits and allows you to discover Cornettes de Bise massif on all its faces.

From Thonon-les-Bains, take the direction of Morzine then the D22 towards Abondance. Follow “Vacheresse chef-lieu” and continue in the direction of the Bise mountain pastures. Continue to the end of the road to reach the car park of the chalets de Bise 1502 m located under Cornettes de Bise.

The departure is the same as for the hike to Lake de Darbon.

Take the path on the right behind the Refuge of Bise to join the Pas de la Bosse by a rather steep path. Then go left to reach the Serrauquin couloir. The ascent is steep and the effort required to reach the top of this couloir with its reddish rocks is significant. It should be noted that this couloir is often visited by many ibexes.

At the end of the couloir, continue on the right on the ridge that dominates the slope overlooking Bise. The path then becomes steeper and several exposed passages encourage caution. The footpath in the rocks requires sustained attention, as the holds are slippery and slippery.

A long crossing on the ridge allows to finally reach the ridge of Cornettes de Bise clearly visible with the cross above it.

Go down the path to the left of the summit of Cornettes de Bise. It will take you through a lapiaz that you have to de-escalate to reach the Col de Chaudin. This col marks the border with Switzerland. Then, take on the left the horizontal path towards Montagne de Loz. After a bend on the right, the pathway takes you through a large combe of rocks inhabited by ibexes. You finally reach the Chalets de Loz nestled at the foot of Mount Gardy.

The path then goes left in a large bend to reach, after a short climb, the Col d’Ugeon facing the Dent de Velan. In a few minutes, a short ascent allows reaching the base of Dent de Velan with a very nice view of Dent d’Oche and the Lac de Darbon.

Then, return to Col d’Ugeon to take the path that leads back to the Chalets de Bise after a beautiful crossing of the mountain pastures. Note the sale of goat and cow cheeses at the chalets.

Photos of the Cornettes de Bise