Home » Hikes in the Bornes Massif

Les Bornes is a mainly limestone massif located between the Aravis to the south and the Chablais to the northeast, the highest point of which is the Pointe Blanche at an altitude of 2438 m and remains a prime destination for a leisurely hiking experience. Indeed, it is possible to carry out many fairly easy routes such as Lake Bénit, Parmelan or Pointe d’Andey with superb views of Lake Geneva, Lake Annecy or the neighbouring Chablais. More challenging peaks are also on the agenda, such as the Bargy or the recognizable Jallouvre with its eroded west face. Wildlife lovers will not be disappointed as it is also possible to observe ibexes, lammergeyers and vultures. Finally, the Massif des Bornes is also the ideal place for an introduction to alpine and cross-country skiing on the heights of Mont Saxonnex. 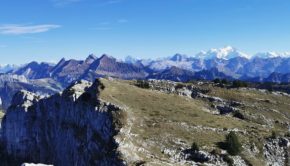 Le Pas du Roc is an easy walk that makes you discover the alpine meadows in the middle of the mountains by means of an unusual path on the cliff side, traced in 1830, which allowed transporting the wood intended for the ovens located in the hamlet of the " Verrerie"

A great classic of the Massif des Bornes, Mont Veyrier is a summit that never ceases to impress walkers who come to walk on its slopes. Overlooking the village of Veyrier-du-Lac, Mont Veyrier is a magnificent belvedere on Lake Annecy, the Semnoz, as well as the peaks of the Aravis

Located at the foot of the majestic Bargy Massif, the Lac Bénit is a haven of tranquility. Family walk par excellence, the itinerary is within the reach of all inasmuch as that the very short path remains devoid of difficulties and technical passages. Two paths are available to the walker

Pointe de Sur Cou, whose toponym means “the peak above the pass,” presents itself as a vast grassy dome on the heights of La Roche-sur-Foron. In spite of its average altitude, the top offers an unexpected panorama with a splendid 360 ° view of Lake Geneva area

The Lac de Peyre remains a family hike par excellence that will enchant youngsters. Without difficulty, except perhaps the steep footpath reaching the Col de Balafrasse, the route allows access to the lake by a well-marked trail climbing