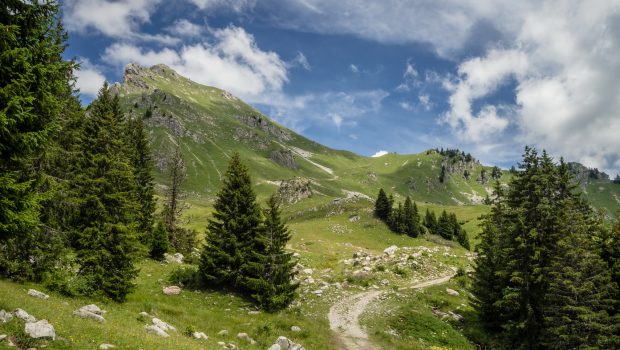 Pointe de Chavasse is a summit of Chablais dominating Praz-de-Lys Sommand. Its toponym, whose origin remains similar to that of the Pointe de la Chavache near Montriond, refers to a summit invaded by undesirable plants 1. The ascent of Pointe de Chavasse is easy and does not involve any particular difficulty, except for a very short passage on a ridge that can certainly impress, but under no circumstances be an obstacle, even for people with a fear of heights. In the beginning, the climb in the alpine pastures of Chavasse is enjoyable and the meeting with the marmots and ibex quite frequent. From the Col de Vésinaz, the trail to reach the summit of Chavasse becomes steeper and narrower. The views of the Marcelly, the Haute Pointe and of course the Mont-Blanc range are splendid. Note that the route is the same in its first part with that of Pointe de Chalune.

The trail begins to the left of the road facing the Pierre Rouge chairlift. Follow the wide road. Just before the Chalet Blanc, turn left to follow the direction “Pointe de Chavasse 1 h 00” as shown on the sign. Continue towards the Col de Vésinaz visible in the distance. The ascent becomes harder. Just before the summit of the Col de Vésinaz where the trail divides in two, turn right and proceed on the few switchbacks arriving at the pass. Follow the sign indicating Pointe de Chavasse by a path that brings to below the peak. Turn right to get to a small pass with an impressive view. Continue the path on the left that runs along the ridge to reach a grassy overhang that gets through beautiful rocky spurs. In a final effort, you reach Pointe de Chavasse.

The descent can be made by the same route. However, I propose a variant drawn in blue on the map, wilder and less frequented. Go down to the small pass under the peak, and head in the grassy valley opposite Pic de Marcelly. You’ll get to the edge of the forest that must be followed at first. The path becomes more marked, plunges into a small valley, and enters the wood into a maze of rocks. Continue along the road that you see on the left until you reach a fence where you will have to turn left to get it.

Thats a beautiful hike! Thank you Pierre-Alexandre for this website!