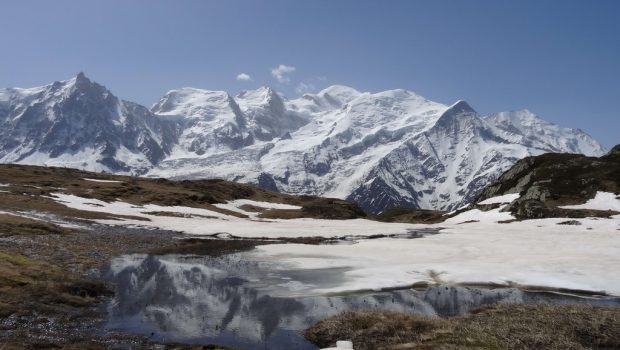 Aiguillette des Houches is a magnificent stroll in the heart of the Mont-Blanc Massif that takes part of the Tour du Mont Blanc. With its sumptuous views of the Mont Blanc Massif, this hike will undoubtedly remain an unforgettable experience for the hiker.
The itinerary describes a loop starting from Parc de Merlet, passes by the Refuge of Bel Lachat, the wet meadows of Carlaveyron, Aiguillette des Houches, and returns by the Chalets de Chailloux.

In the direction of Chamonix leave the express road to get to the village of Les Houches, and take the direction of Parc de Merlet.
The parking lot is located just before the road ends. You may also notice the second small parking lot right at the entrance to the park.

The path starts at the entrance of Parc Merlet. It enters the forest in the direction of the Refuge of Bel Lachat. Fifteen minutes later, you reach a sign indicating “Refuge de Bel Lachat” and notice a footpath on the left: it is with this pathway that you’ll go back to the parking lot.
After crossing the Torrent de Lappaz, the track gets narrower and slightly vertiginous; A handrail and crampons planted in the rock facilitate the progression. The pathway becomes steeper and runs along the Vouillourds ravine by wide switchbacks.
The refuge perched in the void, facing the Chamonix Valley, offers a very nice panorama that deserves a halt.
Continue the trail that goes to the left leaving the direction of Brevent once arrived at the cairn with the signpost of the Reserve. After a short descent, the route gets through the meadows of Carlaveyron, where the path with cairns winds between small ponds.
After passing at the foot of Aiguillette du Brevent, the trail goes up to reach Aiguillette des Houches.
The view facing the Mont Blanc and its neighboring peaks are magnificent, from Aiguille Verte to Mont Joly. Turning around, you can see the Fiz Massif with Pointe d’Anterne, Aiguilles Rouges Massif, Mont Buet, and very near the arrival station of Brévent’s cable car.
Several IGN maps are needed to locate all the many surrounding peaks.
After these moments of contemplation comes the time of the descent.

From Aiguillette des Houches take the path that goes down into the valley to reach a vast plateau.
The track is well marked and passes near the ruins of old chalets, and continues in a pasture to arrive at the Chalets de Chailloux.
After passing a source of drinking water and crossing a barrier, a sign indicates the direction of Parc Merlet by a wide road; this pathway turns to the left in a switchback before getting into the forest.
The itinerary stops on the fence of the animal park: take the path on the left for a last short climb, to reach the footpath seen during the ascent.
The park is worth a detour that will be appreciated by youngsters.