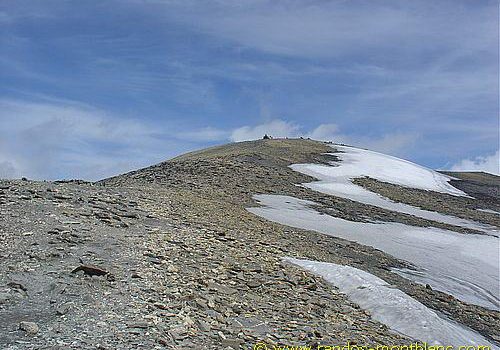 Published on 7 August 2005 | by Pierre-Alexandre

The ascent of Mont Buet can be seen as the culmination of a hiking season of varying levels of difficulty, as the objective is very high, the elevation gain very important, and the route very long.
Several technical difficulties are encountered: a trail with cairns only after the refuge, a passage of large blocks of perilous stone, as well as some névés composed of hard snow practically all the year.
The final ascent after 2,800 m requires a violent effort to arrive on this lunar dome.
The panorama at the summit of Mont Buet is magnificent and will quickly erase all the efforts provided.
Since the course is long and the altitude high, do not forget the usual precautions before each hike: check the weather, and take a map as well as warm clothes.
In early summer (late June-mid-July), the cleats are useful for the névés especially present at the top.

After Chamonix, take the direction of Argentière and get through the Col des Montets. After 2 km, park in the parking lot of the Buet station on the right of the road.

From the parking lot, take the path on the other side of the road towards the Refuge de la Pierre à Bérard. Do not be afraid of the signs indicating six hours of walking to get to the Mont Buet, as the time is exaggerated.
Pass the Chalets de la Poya in the direction of the wood and, by a track on the right, rise towards the Chalet de la Cascade de Bérard.
Leave on the right the trail of Tré les Eaux and continue along the river. After crossing two footbridges, the path becomes steeper, and, a few switchbacks further, leaves the forest.
The road then divides into two at a fork: take the one on the right.
At the refuge, turn right to the path rising rapidly up to an area composed of large granitic blocks where you have to make your way by following the cairns and the red marks on the blocks.
Leave the Col de Salenton on the left and continue until reaching a combe where attention is de rigueur. The summit of the Mont Buet is now clearly visible on the right.
The effort is more important to reach panoramic plateau dominating the valley of Diosaz. After a well-deserved break, take on the right the path that leads to an antenna on the ridge of the Mortine.
The progression is hard and the pace slower to ascend the very short and very steep switchbacks getting to the summit. The path becomes less steep after passing the relay in sight of the great cairn that marks the summit of Mont Buet, often covered with snow.

Retrace your steps and take the same path as described above. A short detour reaches the Col de Salenton materialized by a cairn visible on the right, and which offers another point of view on the Aiguilles Rouges.

Hello.. planning to do the trek mid October.. any advice, equipment or route recommendations would be much appreciated.

Hi,
Normally, you shouldn’t expect any snow mid-October as snow usually appears mid-November, even at such an altitude. You can follow the route as described in my description. I would suggest though that you take warm clothes with you as it can get cold at this time of the year, especially when the wind blows.

How about ascending Mont Buet in late April? Is it safe? Is it even possible? I suppose there is still lot of snow in April.

Hi,
Yes, it’s indeed possible to climb Mont Buet in late April. Nonetheless, there’s still a lot of snow on the massif (about 2 meters), so you’ll need either snowshoes or skis. Personally, I prefer the ski touring option because it makes the descent much more pleasant.

Thanks for the answer.

One more question – is there any place/trail at Samoens where I could ascend and see Mont Blanc summit?

Asking because I’ll be at Samoens in late April and as I love hiking I just need to take a chance and do some hike. Even if it’s not hiking season. 🙂

You can indeed attempt to ascend via Samoëns. The starting point is located in Salvagny, south of Sixt-Fer-à-Cheval. From there, take the path that goes to “Le Grenairon : Chalet Hôtel du Buet”, then continue to reach la Cathédrale, la Crête de la Montagne des Eves, and finally the Buet.
You can check the track out here: http://tracedetrail.fr/fr/trace/trace/40878
It’s 28 km round-trip for 2290 meters of cumulative gain. It’s much harder than the path I describe in my article.

Hi – two questions. First, is it possible to ascend Mt Buet from the east (Samoens)? Second, how difficult is the terrain? For reference I am a skyrunner, done Mont Blanc 80Km 5 times. Thanks for any help, Dominic

I’ve never climbed Mont Buet from this side, but according to the map and what I could hear from some of my fellow visitors, it’s much steeper than the path I’ve described here since it’s 28 km long round-trip and has a 2200-meter elevation gain. Unfortunately, I don’t know exactly how the terrain looks, but it shouldn’t be much different from what you could experience during the Mont Blanc 80 Km race.

Thank you for this, it is very helpful. I might try it in two halfs before the single cross.