In winter, a snowshoe or ski tour is another way to discover the massifs with their white coat on. A snowshoe or ski trip requires special preparation as snow involves a number of risks (avalanches, airborne snow, ice, etc.) which must not be neglected under any circumstances. This is why it is essential to train first on easy routes in order to be aware of the conditions before opting for more difficult hikes. In any case, it is more than recommended to do your winter outings with one or more trained people.

Nestled in the Samoëns Valley and overlooking the Col de Joux Plane, La Bourgeoise can be the object of a short family stroll both in winter and summer. The route leads effortlessly to the top of La Bourgeoise with a beautiful panorama

The Chalets d'Ayères constitute a beautiful scenery for a winter outing in Passy Plaine-Joux ski resort. Located under the Fiz Massif in front of the Mont Blanc Massif, the route

Little known by walkers because of its off-centered location towards the ski resort of Praz de Lys Sommand, Crête des Rasses nevertheless remains a nice hiking objective with its panorama on Haute Pointe, Pointe de Rovagne, but also Montagne d’Hirmentaz. Without difficulty

Located in the heart of the Vallée Verte in Chablais Massif, Pointe de Miribel is an ideal objective for an initiation to winter hiking or for training a bit in the beginning of the season. Easily won, the summit provides a magnificent panorama of the

The Prarion, whose toponym evokes a “round meadow” or “ruined meadow,” is undoubtedly a beautiful winter hike. Located at the end of the Chamonix valley, this summit will enchant the hiker with the splendor of the panorama unveiled on Mont Blanc, Aiguilles Rouges, Fiz, and Aravis 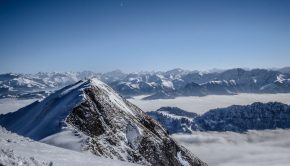 Pizol ski resort is located in the Canton of St. Gallen, in Wangs and Bad Ragaz villages on the Liechtenstein border. It takes its name from the eponymous summit culminating at 2844 m southwest of the ski resort

From the ski resort of Sommand, many summer hikes are possible in winter. For a discovery of the snowshoe outing, I propose the Col de Cordon that is an easy and safe route. The elevation gain of 230 m is climbed in about one hour depending on the snow conditions