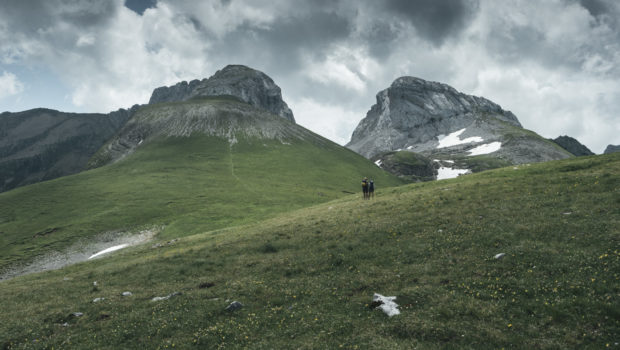 The itinerary starts at the place called “La Lanche” south of Le Reposoir and climbs into Bois de Méry to reach La Gueule à Vent in the first place and the Tête du Château in the second place before finally reaching Pointe des Arbennes. It is to be noted that the panorama offered at the summit is splendid since one can observe a large part of the Mont Blanc Range, the Aravis Massif as well as the Fiz on the other side.

I’ve classifed the course in the ” Hard ” category because of its length (14.3 km round trip) and the physical effort required (1330 m of elevation for an average slope of 19.8%). Also, the ascent in the forest between Le Vélard and Les Chalets de Méry can be challenging due to the many nettle trees and spiny plants on the route. I, therefore, recommend the use of walking shoes with high upper to avoid the risk of injury or itching on the ankles.

The toponym Arbenne refers in patois to a “white partridge”, a species that was once found in large numbers on the mountain 1.

Reach the village of Le Reposoir and continue to the car park of the place called “La Lanche”, which is the final stop on the road.

From the car park, take the track indicated by the sign “Pointe d’Areu – 4 h 45”. The trail rises gradually in the forest and then climbs quite frankly a little further. At a sign mentioning the direction of the farm where you can buy goat cheese, turn left on the small unmarked path that crosses shortly after the Nant du Dard stream and follows the direction of Méry as shown by the sign. Afterwards, the trail climbs again into the forest and then flattens to cross a tall grass clearing. The trail then joins the Chalet du Vélard.

The pathway leads shortly afterwards to a great clearing under the imposing Pointe d’Almet. Continue on the left towards Méry as mentioned by the sign. The footway rises fairly rapidly. Further on, the footpath describes a curve to the left and goes up into the woods. Beware of nettle and brambles on this part of the route! Yellow and red markings painted on the tree trunks show the trackway to follow. The route is also marked by small posts with yellow arrows on a green background.

Finally, one ends up on the Méry mountain pasture under the Pointe and Tête du Château. Continue to follow the yellow arrows. The pathway then crosses a small wooden bridge. Shortly after, one wins the Chalets de Méry which already offer a splendid panoramic view of Pointe d’Almet, Pointe Percée and the Bargy. From there, take the track marked by the sign “Pointe d’Areu – 2 h 40”. The footway passes by a white cross on the right and progresses over the chalets. Follow the markings represented by the yellow arrows and cairns which are then transformed into white and red markings. The trail then advances under the Pointe du Château to arrive at the Col de Gueule à Vent.

From there, continue on the path evolving under the Pointe du Château. The pathway then climbs steeply up the slope to reach a first flat spot. Pointe d’Areu and Pointe des Arbennes are in sight. Shortly afterwards, one climbs a steep hill to summit the Tête du Château. Then, the track goes down and continues into the plain to climb a small mountain that requires a reasonably sustained effort. The cairns mark out the path to the summit, which is marked by a cross.