Very easy hikes (less than 350 m of elevation gain, less than 1 hour of walking, less than 5 km round-trip) in Haute-Savoie, Switzerland and Italy. 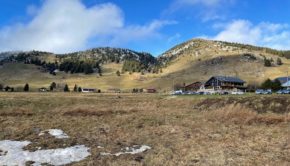 Located in the municipality of Viuz-en-Sallaz, the Mont Vouan site includes a group of seven millstones (i. e. millstone quarries) classified as historical monuments on 11 March 2009. Exploited from the late Middle Ages to the end of the 19th century, these milling mills bear witness

Located in the Vallée Verte, in the heart of Chablais Massif, Pointe de Miribel remains an ideal objective for the beginner or for training at the beginning of the season. Very easy to reach, the summit offers a magnificent panorama on alpine pastures and peaks

The Signal des Voirons offers a very accessible walk even for youngsters, allowing to discover along the way a magnificent panorama on Lake Geneva and the Jura Massif on one side as well as Mont Blanc and Chablais

Let's have a little excursion to the Canton of Fribourg for a typical family hike: the Gorges de la Jogne. The itinerary, following against the current the eponymous river, is accessible, playful and full of surprises for the whole family since many tunnels

From the ski resort of Sommand, many summer hikes are possible in winter. For a discovery of the snowshoe outing, I propose the Col de Cordon that is an easy and safe route. The elevation gain of 230 m is climbed in about one hour depending on the snow conditions

The Bois du Bouchet is a magnificent stroll within the reach of all, in a sumptuous setting, a few minutes from the center of Chamonix. It gives the right to see the highest peaks of the valley by strolling on a marked circuit without any difficulty

Lac des Plagnes can be the object of a beautiful family walk in the Valley of Abondance. Very popular with fishermen in summer, its banks are accessible by a small path that makes a loop and allows admiring the surrounding landscape

From the Col de Pierre Carrée, which is the northern part of Flaine ski resort, it is possible to take a pedestrian route that leads among the pines to reach a beautiful point of view on the valley of Cluses and the ski resort of Carroz d ’Araches. On the other side is the panorama of the immense

The Pont du Diable is a nice little walk near Mieussy as it allows discovering the Giffre in a small valley. Under the bridge, the Gorge du Giffre is four meters wide, nine meters deep. It is the ideal ground for the practice of canyoning, kayaking, or sport fishing. The hydroelectric dam, operated by