The itinerary proposed here is an easy winter stroll starting from the ski resort of Praz-de-Lys and allowing to reach Sommand by the Col de la Ramaz. It can be an initiation to the practice of snowshoeing as there 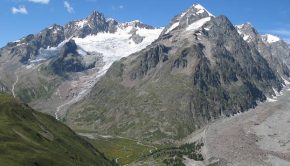 Let’s have an excursion in Italy, on the route of the Tour du Mont Blanc, for a typical family walk that promises to be pleasant: the Lac Chécrouit and the Lac des Vesses. Located in the Val Veny delimited by the Col de la Seigne to reach the Tarentaise, these two lakes offer an unobstructed view

Pointe de Lachau is a stroll without any difficulty (if not the last part of the ridge a little steep when arriving at the summit), and feasible in half a day. Next to the imposing Mont Chauffé that will accompany us throughout the hike

Located on the Plateau des Glières at the end of the Aravis Range, the Chalet des Auges, just at the summit of the eponymous mountain, is the goal of a beautiful winter hike. This trip offers a relatively short itinerary with a slight elevation gain, and a magnificent

Pointe de Deux Heures (whose name refers to the climbing time) is one of the most unknown summits of Haute-Savoie. Indeed, the absence of signage makes this walk somewhat wild, especially given the low number of hikers encountered on the track

The Vuache is located in the west of Haute-Savoie. It is part of the Jura Massif from which it is separated by the Cluse of the Rhône. The Vuache is a narrow secondary range of 14 km in length and 1.5 to 3 km in width, Northwest-Southeast oriented

With Montagne de Chevran, Mont Orchez constitutes a superb belvedere on the Valley of the Arve facing the Môle and the Bargy Massif. Without any difficulty, the path gets through a beautiful forest by a sometimes very steep path. In wet weather, the descent can be very slippery

Situated opposite Pointe de la Gay, this summit named Sur la Pointe is a hiking destination within easy reach of everyone, and is ideal for a nice family outing. The summit of Sur la Pointe offers a beautiful panorama of Lake Geneva, the Roc d'Enfer and the pastures of Chablais, and overlooks

The Lac Damoz des Moulins is an ideal hiking goal by a hot summer day. Most of the itinerary takes place in a forest where reign freshness and pleasant humidity. The lake of modest size is nestled at the foot of the Tavaneuse Massif in a calm and serene environment

The Chalets du Truc is an easy walk from Les Contamines-Montjoie, facing Mont Joly, with a breathtaking view of Dômes de Miage, the Col du Tricot and Aiguille de Bionnassay. This outing is accessible to all, because without any technical difficulty