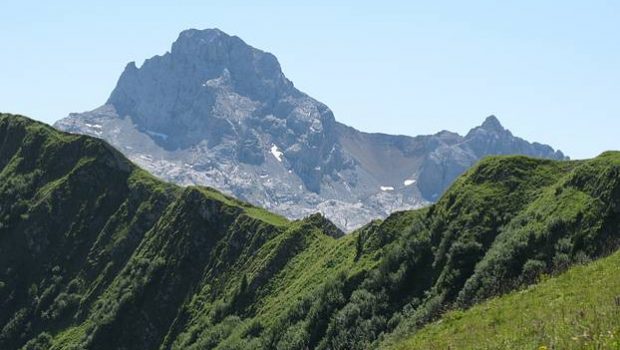 Pointe de Deux Heures (whose name refers to the climbing time) is one of the unknown summits of Haute-Savoie. Indeed, the absence of signage makes this walk somewhat wild, especially given the small number of hikers encountered on the track (the others will have preferred the popular Lacs de Peyre). The panorama offers a breathtaking view on the combes of the Aravis Range and the Bornes Massif just behind. Note that’s possible to climb Pointe de la Botte to win Pointe de Deux Heures; However, the trail isn’t very well marked.

Reach the Col de la Colombière. From there, take a small road indicated by a sign “Buvette d’Aufferand. ” Park at the end of this road.

From the Buvette d’Aufferand, take the path marked out by fences. At a first intersection, stay on this road that turns left. Once arrived in a pasture after a short descent, turn on the path to the right of the cairn rising in the Combe des Fours. After some switchbacks, the itinerary passes through high grass and nettles. Once the Combe des Fours has been reached, leave the left trail in the direction of Pointe d’Almet and take the one on the right towards Pointe de Deux Heures. Once arrived on a grassy plateau, take a little-marked track on the left going towards the peak. This one is marked out by grasses and nettles lying by the passage of the few hikers. The summit is won in about 10 minutes.