The ascent of Mont Buet can be seen as the culmination of a hiking season of varying levels of difficulty, as the objective is very high, the elevation gain very important, and the route very long. Several technical difficulties are encountered: a trail with cairns only after the refuge, a passage of large 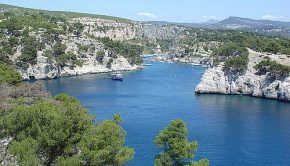 The itinerary presented here describes a loop which allows discovering the whole site of Tavaneuse. All the beauties that one can meet during a hike are part of the scenery: high peaks, a lake, waterfalls, exposed paths, alpine pastures, late névés, and very abundant flora on the whole course. This hike

The itinerary that I propose describes a loop that starts from the car park of the Allamands, leads to the Refuge du Col de la Golèse, climbs a little more and goes down to the Refuge de Bostan nestled at the foot of the impressive walls of the Aouille du Criou. Note the possibility of climbing the Tête de

The Lac de Lessy is nestled in a valley at the foot of the Jallouvre, the Buclon, and Aiguille Verte. The route proposed from the Chinaillon is intended for good walkers; It takes a route that goes through Aiguille Verte before going down to the Lac de Lessy. In the first part of the trail, signs inform