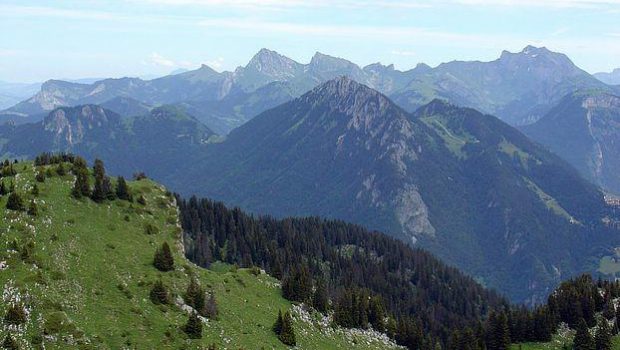 Published on 3 November 2005 | by Pierre-Alexandre

Little visible from the valley, Pointe d’Ireuse presents itself rather under the appearance of a vast dome than under the aspect of a peak. The itinerary describes a loop passing through the Chalets de Nifflon d’en Bas, then the picturesque chapel of Nifflon d’en Haut, with a return to the Ermont by the Chalets des Nants.
There’s no technical difficulty nor exposed passage on this very pleasant route, which offers a splendid sight on the summits of Chablais.

From Annemasse, take the direction of Samoëns to the center of St-Jeoire, then turn left in the direction of Thonon-Onnion (D26 Road). Go past Onnion then Mégevette and proceed in the direction of Thonon until you reach a fork to the right towards La Chèvrerie and Lac de Vallon (D236 Road). After about 1.5 km, turn left into a small road towards Grange, Frêne, l’Ermont. Cross La Grange, then Le Douai and continue straight until the parking lot right after the bridge (green railings) before the hamlet of Ermont.
The starting point for Pointe d’Ireuse is the same as Pointe de la Gay.

From the car park, continue along the paved road a few meters to get to the signpost presenting the various possible routes from l’Ermont.
Take the road on the left for a few meters and turn right into the meadow along the fence to arrive at the path that enters the forest. Most of the gain is climbed in this wood by wide, steep switchbacks that rise quickly to reach Nifflon d’en Bas.
The chalets and the large cross suggest a well-deserved break after this not inconsiderable effort.
Continue the road on the right in the direction of “Nifflon d’en Haut, Pointe d’Ireuse,” leaving on left the pathway that goes to the small valley.
The trail enters the undergrowth and is less steep than before. After a few switchbacks, the Chalets de Nifflon d’en Haut mark the junction for the Pointe d’Ireuse.
Proceed on the well-marked path that runs between the stones to reach the summit materialized by a cairn.
The 360 ° panorama from the Pointe d’Ireuse will awe all the walkers, as most of the mountains of Haute-Savoie are visible. The binoculars are indispensable to recognize most of these tops, such as Mont Billiat, Dent d’Oche, Cornettes de Bise, Pointe d’Autigny, Mont Chauffé, Mont de Grange, Pic de la Corne, Roc de Tavaneuse, Dents du Midi, and of course the Mont-Blanc Massif.
In your back, you can observe the entire Lake Geneva.

From the top, turn back to Nifflon d’en Haut. Take the direction “L’Ermont par les Nants,” then descend to the picturesque chapel, and climb the footpath that zigzags to reach a peak dominating Nifflon quickly.
Redescend by continuing the somewhat steep pathway that winds to the side of the mountain to reach the Col de Seytrouset. Follow the direction of the Nants on the right by the track that passes through the woods.
At a fork, leave on the left the trail that leads to the Col de Balme, and proceed on the right on the marked path in the forest. After getting through the undergrowth, you arrive at the Chalets des Nants (fountain).
Go through the hamlet and move forward along the road, which leads to the starting point, l’Ermont.