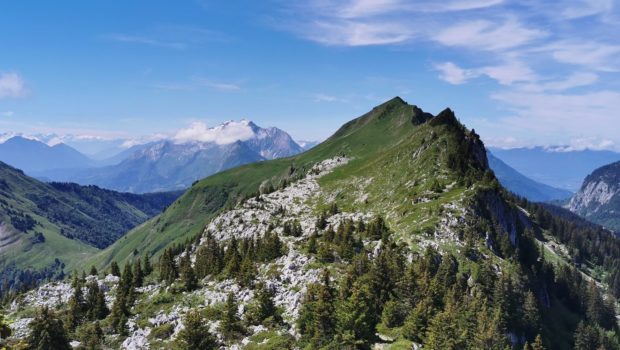 Pointe de Puvat and Pointe de la Québlette dominate the Plateau des Glières and offer a splendid panorama of the Aravis Massif, part of Lake Annecy, Tournette and the Mont Blanc Massif. If this hike is easy to access and the path is well marked up to Pointe de Puvat, it should be noted that the access to Pointe de la Québlette is more difficult in places. However, the direction to follow is obvious and many paths intersect to bring the walker to the summit.

I would like to point out that the path leading to the cross at the top of Pointe de Puvat is very steep for the last twenty metres. In fact, it is a not very technical climbing passage with good handholds, but it is impressive because it is largely exposed to the void. In this context, I do not recommend this passage to people sensitive to the fear of heights. In any case, the view is already magnificent before this final part of the climb.

Go to the Plateau des Glières and park in the very large car park near the memorial.

From the car park, go down and reach the memorial by the path. Turn right and follow the track until you see a sign for the “Col de L’Ovine”. The path climbs through the forest until it reaches the Plan des Mouilles. From there, the progression is marked by wooden footbridges installed in order to avoid as much as possible the very wet and sometimes muddy ground. After several minutes of walking, the Plan du Loup is reached fairly quickly and you end up in a large meadow at the foot of the cliffs. Then take the direction “Col de la Buffaz par le Col de l’Ovine”, and, a few metres further on, take the direction “Col de L’Ovine” as indicated on the following sign. Be careful to notice the direction for the return path which will be via the “Maison du plateau par Chalet du Loup”.

The path becomes narrower and follows the cliff until a short passage of rocks quite steep. Once you reach the Col de l’Ovine, follow the direction of Pointe de Puvat to the left. You will soon reach a lapiaz flat with a magnificent view of the Aravis. Continue towards Pointe de Puvat and its visible cross. A steep path leads to the base of the summit, which the more adventurous can climb (note that it is forbidden to fall).

After a well-deserved break, turn around and head towards Pointe de Québlette, which is clearly visible, as well as the path through the meadows. When you reach a rocky outcrop, leave the path at a wooden post and then turn right to join one of the paths leading to the ridge. The summit is then quickly reached and the view quickly makes you forget the efforts made during the climb.

Take the path back to the Col de l’Ovine and then the Plan du Loup where you have to branch off to follow the direction of the “Maison du plateau par le Chalet du Loup”. Although slightly longer, I found this variant more pleasant on the descent. Once you reach the Chalet du Loup, continue towards the “Maison du plateau” by taking the path in the grass towards the fence and the fir trees, leaving the track on the left.

Continue until you reach a post and head towards the watering hole seen on the way up: this is where you intersect the route from the climb. Further on, you will eventually see the house on the plateau. Note the possibility at the end of the route to take a path to the right which avoids going down to the car park; this path runs along the forest and finally reaches the memorial.