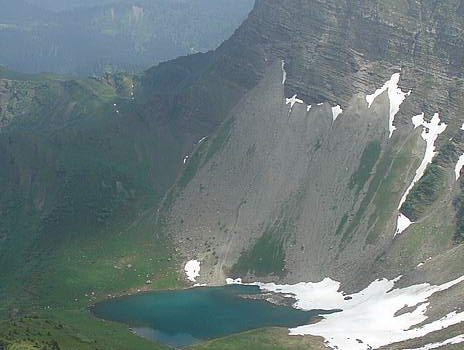 The itinerary presented here describes a loop which allows discovering the whole site of Tavaneuse. All the beauties that one can meet during a hike are part of the scenery: high peaks, a lake, waterfalls, exposed paths, alpine pastures, late névés, and very abundant flora on the whole course.
This hike is reserved for good walkers because of the elevation gain, the length of the course, the sometimes quite exposed passages, and the nature of the trail at the descent that can be exhausting.
This outing must be done absolutely in dry weather as some passages like the Pas de Savolaire can become very slippery, even dangerous in wet weather.

From the car park, take the stone road that leads to the Serannants by a steep slope.
Bypass the main cottage on the left and follow the path in the grass towards the large valley. At a fork, take the direction of Pas de Savolaire, and leave the lower path by which you’ll return.
The well-marked pathway is steeper and rises rapidly to the bottom of the Pas de Savolaire where névés remain quite late in the season.
After an important effort, you arrive at the Pas de Savolaire materialized by a cross.
Turn left towards the Col de Tavaneuse by the ridge trail. The slope is quite steep in the first 200 meters, then flattens out when approaching the Roc de Tavaneuse.
Arrived at a very recognizable peak, the path separates in two: on the left, the track goes around the bottom of the Roc de Tavaneuse; on the right, after a little descent in the pebbles, it allows climbing directly to the summit by a steep short passage.

Now comes the descent on the Col de Tavaneuse. The route follows the ridge from where you can have a look at the Lac de Tavaneuse at the foot of the Pointe d’Entre-Deux Pertuis.
Arrived at the Col de Tavaneuse, the path becomes very steep and the disintegrated pebbles do not facilitate the progression.
After this difficult passage, you wind in the rhododendrons and reach the Lac de Tavaneuse.
The path that leads back to the Prétairié runs along the small torrent, which transforms into multiple waterfalls. Steep passages and high steps make the descent arduous: hands are often useful to ensure a secure progression.
Arriving in sight of the Sérannants, the trail offers the possibility of joining directly the car park of the Prétairié. Although shorter, I prefer the path on the left as it’s less abrupt and more pleasant; This footpath eventually reaches the track taken in the morning.

Photos of the Roc and the Lac de Tavaneuse