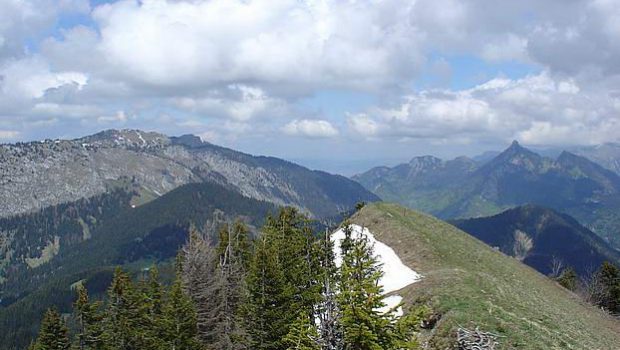 Being the highest peak of a massif of average altitude, Pointe de la Gay dominates a vast plateau and discovers a 360 ° panorama on Lake Geneva including Roc d’Enfer, Cornettes de Bise, and Pointe de Chalune among others. The itinerary describes a loop using paths, starting with the paved road at the parking lot, a first forest trail at the ascent, the vast mountain pasture of Tré le Saix, and another forest trail when descending.
No technical difficulty or exposed passage, except the short passage with chains in the wood when the weather is wet. However, attention must be paid to children when arriving at the top of Pointe de la Gay, which is quite steep on the west face.

From Annemasse, take the direction of Samoëns to the center of St-Jeoire, then turn left in the direction of Thonon – Onion (D26 road). Go past Onion then Mégevette and continue towards Thonon until you reach a fork to the right towards La Chèvrerie and Lac de Vallon (D236 road). After about 1.5 km, turn left onto a small road towards Grange, Frêne, l’Ermont. Pass through La Grange, then the Douai and continue straight until the parking lot right after the bridge (green railings) before the hamlet of Ermont. Note that the departure for the Pointe de la Gay is the same as that of Pointe d’Ireuse.

The path begins at the parking lot and takes the stone road. Follow the pathway to the Chalets des Nants that you reach in an hour. Before arriving, notice the path on the right that comes from the Chalets de Tré le Saix and that you’ll take for the backward journey.
From Chalets des Nants, take the path on the left going to Col de la Balme won in thirty minutes. Take the trail on the right towards the Col de la Lanche, which soon enters into the forest along the ridge. A rather abrupt descent is equipped with chains and requires some vigilance in wet weather: there are no exposed passages, but a lot of rocks. At the pass, continue towards the Pointe de la Gay. The last ascent is very steep and requires a sustained effort for about twenty minutes.
The arrival at the top of the Pointe de la Gay is a great moment as you the discover the magnificent panorama. Do not forget the binoculars that will make discover the many peaks and mountain pastures.

Go down to the pass and turn left on the trail towards the Col de Vallonnet and the Chalets de Tré le Saix. It is also possible to reach the Col de Vallonnet by taking the path leading to Béran directly from the summit (the path runs along the forest on the left). At a bifurcation, do not follow the Nants and turn left on a small steep hill.
Follow on the left the crest of this mound, and go down again towards the hamlet that you can see in the distance.
Once arrived at the bottom of the chalets located at the foot of Sur la Pointe, at the sign, take the grassy path that goes right into the valley. After a short climb, the trail goes straight down to a sign indicating “Tré le Saix et chalet de la Ficlaz.” Take the opposite side of the Ficlaz, which descends rather steeply on a forest track through the woods.
The trail reaches the stone road taken in the morning. Proceed to the parking lot.