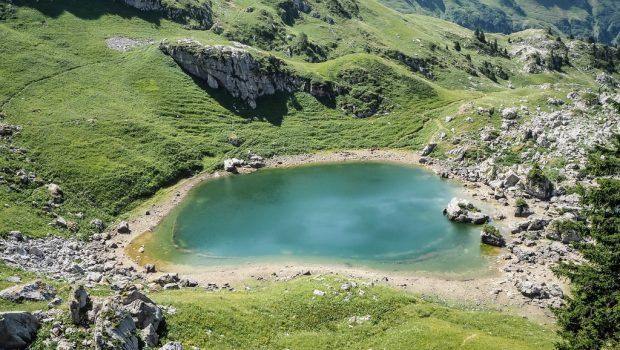 Situated in the heart of Chablais Massif between the imposing Dent d’Oche in the north and Cornettes de Bise in the south, the Lac de Darbon represents an agreeable hiking objective. The itinerary describes a circuit reaching the Col de Bise, the Col de Pavis, the Lac de Darbon, and the Col de Floray before descending on the Bise hamlet. This hike must be done with dry conditions since the descent is very steep.

From the parking lot, take the path on the left just in front of the Chalets de Bise. Continue to a bifurcation and turn right to follow the direction of the Col de Bise (the path on the left is the one you’ll take for the descent). The footpath is steeper on its way to the pass. After having climbed the pass, go down and walk at the foot of the mountain to go up again to the Col de Pavis (1944 m). Several ibexes live here and are readily observable. Don’t take the right trail going to the Col des Portes d’Oche and stay on the left one to arrive at the Lac de Darbon.

Take the footpath indicated by a wooden pole and going to the Col de Floray (1,955 m) located between Pointe de Pavis et Pointe de Bénévent. After crossing the pass, the descent is very steep at the beginning but becomes smoother as it joins the parking lot. It’s possible to buy some palatable goat and cow milk cheeses at the Chalets de Bise.

Photos of the Lac de Darbon

Hello! I really appreciate all your hikes and tips, you have set up a great page. Just to let you know that the GPS coordinates for parking seem to be wrong. We had planned the hike and I put in the GPS coordinates and we ended up doing the hike up Pointe de la Chalune as this is where the coordinates take you 🙂 It was still a lovely hike! just fyi…