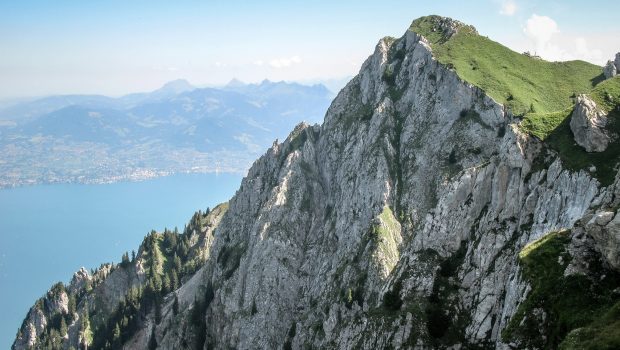 Published on 30 October 2022 | by Pierre-Alexandre

Located at the end of Lake Geneva in the heart of Chablais, Le Grammont is part of these walks whose memory remains forever in your mind, as the landscapes are grandiose. Passing first by the picturesque Lac de Taney, the route then rises towards the Col des Crosses and Le Grammont ridge offering a splendid view overlooking Lake Geneva. The footpath finally reaches the summit where hikers can observe the Jura and the Chablais Massif, the Rhone Valley, Grand Combin, Haut-Giffre as well as the Mont Blanc Massif.

Despite a seemingly sustained elevation gain, the hike is classified among “Intermediate” hikes, as apart from the absence of difficult passages, the elevation profile stays regular: there are no very steep portions.

Take the D1005 road (ex RN5) to Evian and then Saint Gingolph. Continue along the Route Cantonale 21 in the direction of Vouvry. Drive to Miex and park in the large paying car park (1 CHF per hour in October 2022) at the end of the road at “Le Flon”.

Take the right-hand path at the end of the car park, which climbs steeply through the forest and intersects the tarmac road several times. The ascent continues with short, sharp switchbacks before returning to the road for 200 m to reach the Col de Tanay and then the lake after a short descent.

From the chalets-restaurants, follow the path indicated by a sign “Le Grammont” and winding through the wood by wide switchbacks. It then leaves the forest and reaches the chalet des Crosses where you can already admire the Diablerets and the Cornettes de Bise.

The path later leads to the Col des Crosses under the Grammont before a flat area leading to the bottom of the Grammont ridge. The summit, marked by a cross, is finally reached in about fifteen minutes.

Descend by the same path.

In order to vary the descent somewhat, once you have reached the Grammont ridge, turn right to follow the clearly visible path that follows the ridge to the altitude mark 2044 m on the map. This alternative route offers no difficulty, as the path is well marked and far from the ridge. You can see part of the Lac de Lovenex as well as the Château d’Oche.

Continue towards the sheepfold located at the altitude of 2001 m on the map. A few metres further on you will find the path you took on the way up.

Hi, thank you for all the tips.
Would you know if dogs are allowed off the lead on the Grammont Walk in Lac de Taney? Would you recommend taking our Labrador? We are staying in one of the refuges that accept dogs but I don’t really want to take the dog on the hike if he has to be on the lead all the time. No fun for Ted:-)

Hi, thank you for your message.
Dogs are allowed in the area since it’s not protected by any natural preserve. According to the website of the Refuge de Tanay http://www.lactaney.com/heberger-a-lauberge-refuge-la-vouivre you have to pay a 15-CHF surcharge for your dog.