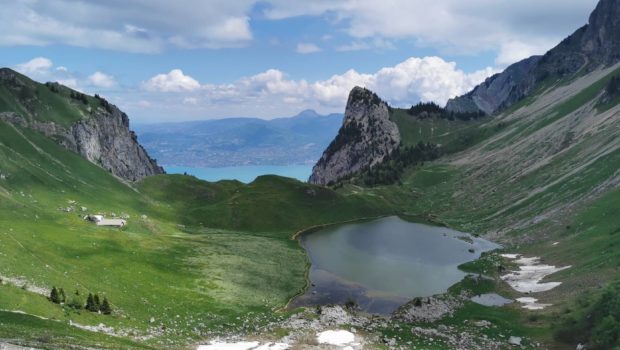 The objective of this hike is to discover the Lovenex Lake nestled in a very wild setting in the middle of a combe bounded by the Grande Miette and the Mont Valeur. This Franco-Swiss hike will take us to the Pas de Lovenex which is the highest point of the itinerary. This will allow us to discover the Lake of Lovenex from a totally different angle. Indeed, once arrived at the Pas de Lovenex, the hiker will be able to observe the eponymous lake, as if suspended above Lake Geneva situated below.

The route is well signposted up to the Col de Croix from where you have to progress by sight. However, I would like to stress that it is impossible to get lost as the landmarks are so obvious. It should be noted that there is a water point at the chalets de Lovenex.

Take the D1005 to St-Gingolph, then turn left towards Novel. Then, continue past Novel to the place called “La Planche”. Park in the large car park.

The path starts from the car park on the left of the road and climbs up. The path goes into the forest, then crosses a meadow. It then joins a gravel track where you should follow the sign to the Lac de Lovenex. Shortly after, leave the track and turn left, continuing to follow the direction of the lake. Continue to the next signpost and turn left as indicated by the red marker.

Follow the track through the meadow and continue through the undergrowth. Once you reach the sign at 1330 m, turn left towards the Col de la Croix and Lac de Lovenex. Then cross the torrent, which is dry in summer, and continue to the Franco-Swiss border. As a reminder, the markings are blue on the stones and yellow for the signs. Continue until you see a signpost that invites you to follow the Col de la Croix. The slope then becomes steeper and steeper to reach the pass that can be seen to the left of the Grande Miette (a clearly visible tooth that stands out in the air).

The last few metres are quite steep and the very stony terrain does not make progress easy. Once reached, the Col de la Croix offers an unobstructed view of the Lac de Lovenex and a small part of Lake Geneva.

From there, the Pas de Lovenex, clearly visible, is on the right. It would be tempting to take the path that goes to the right and crosses slightly downwards to join a path that goes up to the Pas de Lovenex. However, I strongly advise against this route, as it takes you through a scree that is very exposed to the rockfalls that fall down this couloir. It is the numerous ibexes that trigger these rock falls, which cross the top to reach the vegetation on the other side.

It is therefore necessary to descend towards the Lac de Lovenex and then turn right to join the path leading to the Pas de Lovenex. The last few metres are quite steep, but the effort is well rewarded by a magnificent view of Lac de Lovenex which seems to be suspended above Lake Geneva. Note by the way the signpost indicating Lac de Tanay.

Go back down the same path and then take one of the paths towards the lake. I recommend walking around the lake by the east shore (by the right), as this is more suitable for a well-deserved break.

Continue around the lake and reach the chalets of Lovenex which offer a view of Grammont and Lake Geneva. Then, climb back up to the Col de la Croix and descend by the same route as on the way up.