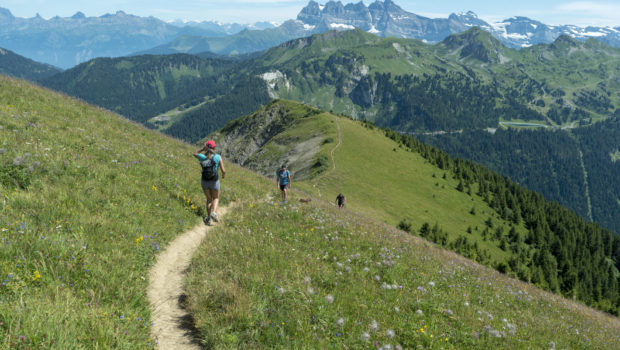 Published on 2 August 2019 | by Pierre-Alexandre

Mont de Grange is one of the iconic peaks of the Chablais Massif. At an altitude of 2,432 m (which is identical to that of the Cornettes de Bise), Mont de Grange dominates the Val d’Abondance in all its splendour. The panorama offered to the hiker is undoubtedly one of the most beautiful in Haute-Savoie; one can admire the Lake Geneva basin, the Jura, the Valais Alps, the Giffre but also the Aravis and the Mont-Blanc massif.

I propose here a hike that starts in St-Théodule to take a long track joining, in particular, the Chalets du Bailly, du Jouly, then Lenlevay where the real ascent begins. The climb up to the Crête de Coicon is steep, but the efforts are quickly forgotten when one turns around to marvel at the beauty of the flora and landscapes that surround the hiker. The final ascent to Mont de Grange requires a sustained effort that will be well rewarded once at the summit. I classified this hike as “Hard” because of the length of the course, but especially the climb starting at the bottom of the Crête de Coicon, with a total of 575 m of positive gain over 2.2 km and an average slope of 26.6 %.

Note that Mont de Grange is part of the eponymous protected natural area. Therefore, dogs must be kept on a leash. The origin of the toponym grange giving its name to the summit remains unknown. There is a saying about it that “If in the morning, the clouds rise to its top, the rain is not far away” 1.

Go to Abondance. In the village, follow the direction of Lac des Plagnes. Further on, turn left on a small asphalt road going towards Follebin. After three turns, leave on the right the road leading to Follebin and continue the road to go up to St-Théodule. The road then turns into a passable track and leads to the chapel of St-Théodule and finally to the car park.

From the St-Théodule car park, take the track going straight ahead marked by the yellow arrows. A little further on, one reaches the Oratoire des Trables where one will follow the direction of “Lenlevay – 1 h 25”. The trail, which is also a mountain bike trail, rises gently alternating between meadows and woods. One then arrives at the Chalet du Covillet where the path will turn left to move towards Lenlevay. The trail continues its slow ascent to go to the Chalet du Bailly. After a few turns in the forest, one later arrives at the Jouly Bas and then the Jouly Haut. The trail then flattens to Lenlevay and offers a splendid view of the nearby peaks.

After crossing the Ruisseau du Drochy, one arrives at Lenlevay. From there, continue towards “L’Etrye – 0 h 45”. Pass the Lenlevay chalets, then, a few metres further on, follow the direction of Mont de Grange as indicated by the wooden sign planted on the slope. After a long straight line, one reaches the sign marking the bottom of the Crête de Coicon. Turn left towards “Mont de Grange – 2 h 00” as mentioned by the signpost.

The ascent on the ridge is steep and in stark contrast to the first part of the route. After that, one arrives at a small plateau halfway up the ascent with a splendid view of the peaks of the Chablais and the Massif du Mont-Blanc. The climb continues again steeply with small tightened bends. A raidillon then joins a first mound. Then, after a rather violent effort, one reaches a large cairn and a slope leading to a rocky chaos. Cross the rocky chaos to finally win the summit materialised by a cross and a viewpoint indicator.