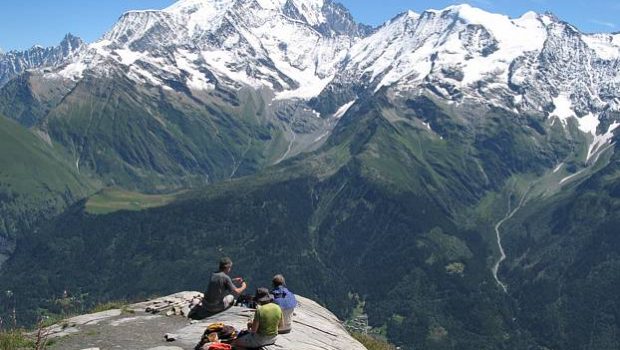 Well visible from the Sallanches Valley, Mont Joly is a real observatory on the Mont Blanc Massif as well as the surrounding massifs, such as the Aravis Range or the Vanoise Massif.
Like the peaks of the Italian Val Ferret, Mont Joly and its panorama on Mont Blanc will give the same sensations of euphoria to the hiker.
Smooth and gentle up to the Pavillon du Mont Joly, the path becomes steeper as it climbs the slope of Mont Joly by “L’Épaule” or “La Panse. ” However, the last ascent to the summit after Mont Joly’s chairlift is less demanding.

From the Planay car park, take the path that runs along the edge of the “Hermance” forest. This trail rises gently and passes through the Chalets de la Grande Combe, de la Coule, and then gets through the wood of Hermance to arrive at the eponymous chalets finally.
From Hermance, Proceed to reach the pass visible further.
From the pass, turn right towards the Pavillon du Mont Joly. There, two variants are proposed: – either get to the summit by “L’Épaule” along the ridge allowing to observe the Mont Blanc; – or to pass through “La Panse” under the crest. The difficulty and the timing are the same, but I have a preference for the option by “La Panse,” much less used than the former.
Arriving at the Mont Joly chairlift, continue in the direction of the summit, on a more stony path.