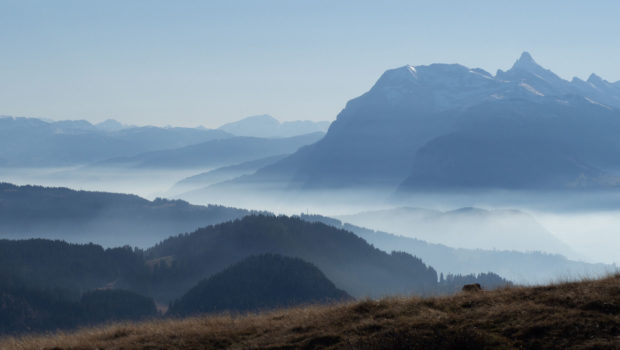 A renowned summit of the resort of Les Gets, Mont Chéry offers a breathtaking panoramic view of the Mont-Blanc massif and the peaks of the Chablais. The itinerary without difficulty starts at Mont Caly (a charming little place with very picturesque chalets) and follows a path well signposted on the crest of Mont Chéry. Although a little steep at first, this hike is safe and very accessible. Be careful, however, since once at the top, children will have to remain under surveillance, as the northern slope of Mont Chery is in fact very steep.

From Annemasse, follow the direction of Taninges. In the centre of Taninges, turn left towards “Gets – Avoriaz”. At the “Pont des Gets”, turn right and continue to reach the resort of Les Gets. At the first roundabout, take the 3rd exit and follow the C6 road named “Route du Mont Caly”. Follow this road to the terminus and park on one of the small car parks of Mont Caly.

From the car park, follow the signposted trail that rises quite steeply in the mountain pastures. After this short climb, one reaches a road that will be crossed at the Sarre des Ebauds. Then, take the path in front of it, which winds its way through the pines. Quite quickly, one arrives at the Col du Lachat at 1632 m that provides a breathtaking view of the Roc d’Enfer. Then continue on the flat for about a hundred meters before a small descent to the final ascent on the wide ridge of Mont Chéry. An orientation table and wooden benches await the hiker to admire the superb 360° panorama over most of the Haute-Savoie mountains.