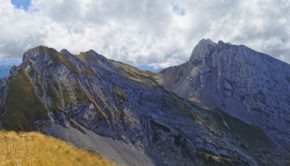 Located in the heart of the Sixt-Passy Nature Reserve, the Lac and Col d'Anterne remain a must in Haute-Savoie. Of glacial origin, Lac d'Anterne is a water reservoir of about 760,000 m3 at the foot of the majestic Rochers des Fiz

Mont de Grange is one of the iconic peaks of the Chablais Massif. At an altitude of 2432 m (which is identical to that of the Cornettes de Bise), Mont de Grange dominates the Val d'Abondance in all its splendour. The panorama offered to the hiker is undoubtedly one of the most beautiful in

Located in the Val d’Anniviers in the heart of the Valais, under the imposing Pigne de la Lé, the Col du Pigne is the subject of a hike that will surely remain in the memory of the walker in search of breathtaking landscapes. The route starts at the Moiry Dam at 2250 m above the village of Grimentz

The Salève is an emblematic summit of Haute-Savoie and the Geneva Basin, offering the walker a panorama of choice on the vast majority of the peaks of the region, as well as on Lake Annecy and Lake Geneva. A quick look at the map shows that several hiking routes are possible in order to climb