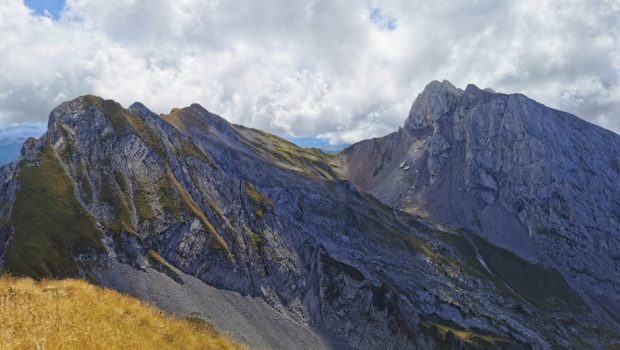 Pointe de Merdassier is a summit located in the Aravis massif offering a 360° panorama on a large number of massifs, notably the Mont Charvin. The only access path to the summit of Pointe de Merdassier is very steep, perhaps the steepest I have encountered in many years. Given the profile of the climb (average gradient of 31% with some passages at 52%), it is used for the vertical kilometre race. This long climb may seem monotonous at first, but the spectacle offered from Pointe de Merdassier makes you totally forget the effort involved.

There are neither technical difficulties nor aerial passages. However, there are no signs apart from the one at the start of the route. Nevertheless, the path is well defined and the route is obvious. It should also be noted that once the summit is in sight at the end of the ascent, the last difficulty must be avoided by the path that runs flat on the right. This slight diversions avoids climbing a small peak that does not add anything, except for unnecessary positive elevation gain.

I absolutely advise against this hike when the weather is wet, as the descent can be very slippery in such conditions. Finally, it should be noted that Pointe de Merdassier site is frequented by many vultures.

The name Merdassier comes from a mountain pasture of the same name located in La Clusaz and indicates a muddy place 1.

Reach the hamlet of l’Étale located about 500 metres after the Col de Merdassier when coming from the Col de la Croix Fry. There is plenty of parking at the various car parks located at the intersection in a bend in the road on the right.

From the car park, go down towards the hotel “La Vieille Ferme”, which you must go round to the right. Signs invite you to follow the direction of the “Pointe de Merdassier – 2 h 50”. At the back of the hotel, turn left and start the ascent which will follow the ski lift for a good distance.

Note that the climb is very steep and straight. The path is obvious and follows wooden palisades. It is best to walk to the right of the palisades as the steps formed by the stones help the progression. After a considerable effort, you reach a flat area with a bench that marks the arrival of the ski lift.

Continue straight on. The slope then becomes even steeper until you reach the bottom of a small summit. Here the path splits into two branches: take the one that goes around the obstacle to the right, almost flat.

The objective is now within reach. A final effort is needed to climb the steep rocky ridge leading to a path on the right. This finally leads to the Vierge Blanche which awaits the hiker at the summit. After a well-deserved rest, you can admire the view of the surrounding peaks.

Follow the same route as described above, but take care on the last ridge. Although this ridge is easy to negotiate on the way up, it becomes more technical on the way down. Once you have reached the palisades, continue to descend to the left of them as the progression is easier there.