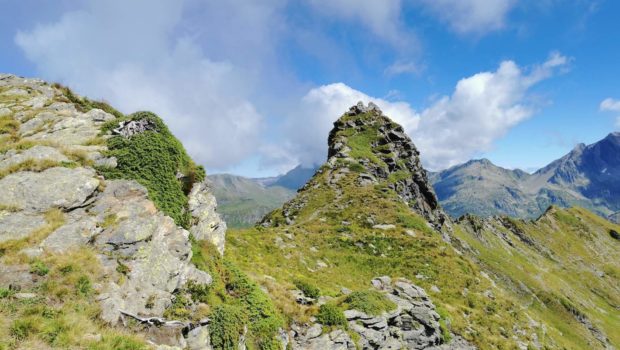 Published on 12 September 2021 | by Pierre-Alexandre

Pointe Noire de Pormenaz is a summit of the Giffre massif overlooking Lac de Pormenaz situated below on its north-eastern flank. Located in a dominant position in relation to the Diosaz valley, Pointe Noire de Pormenaz remains a must-see in Haute-Savoie due to the panorama offered from its summit. Indeed, its summit gives the right to observe the majestic Mont-Blanc range to the south-east, but also the Fiz massif and the Aravis.

The itinerary first reaches Lac de Pormenaz via the Chorde path. This includes a series of ladders that are easy to climb. Then, the route climbs towards Pointe Noire de Pormenaz via a scenic path overlooking the Mont Blanc Massif.

It should be noted that the hike crosses the slopes of the Passy national nature reserve. The latter has a wide variety of environments (grasslands, moors, wetlands) and alpine species (including eagles and ibex). Consequently, dogs are not tolerated, even when kept on a leash.

Go to Plaine Joux via the Plateau d’Assy and park in the resort’s car park.

Follow the route described for Lac de Pormenaz. When you arrive at the lake, follow the sign that says “Pointe de Pormenaz – 1 h 15” and take the path that leaves to the right of the lake. The route is perfectly marked by yellow plaques screwed onto the rocks, small posts also painted yellow and planted in the grass, or yellow dots drawn on the rocks. The path through the meadows is easy and the slope remains moderate.

Continue to follow the path until you reach a rocky escarpment which causes you to lose a little altitude and go around the point to the right.
After passing a gully, the path bends to the left and becomes steeper to reach a first summit with an orientation table on the ground. The panorama is simply splendid. For the more adventurous, it is possible to reach the summit of Pointe Noire de Pormenaz located about a hundred metres away. However, the path is certainly short, but it is very exposed to the heights: I do not recommend this last part to people with fear of heights.

Then follow the route up to Lac de Pormenaz. I propose to go around it from the east via a trail that is poorly marked at the beginning, then joins the lake shore in a second step. The path follows the edge of the lake until a path that goes down towards the col d’Anterne and then a wooden footbridge that you have to cross.

At the sign after the footbridge, follow the direction of “Chalets du Souay par les Argentières – 0 h 55”. This variant avoids going down the Chorde path which, although shorter, is more challenging. It should be noted that the Argentières path has deteriorated since my last visit in 2015. Indeed, many stones and a very eroded ground make the descent sometimes very painful. Some passages are equipped with chains which make the progression easier. Just before arriving at the Chalets du Souay, the route runs along the cliff: a handrail secures this exposed passage.

Then continue on the path taken on the way out to finally return to the car park at Plaine Joux.