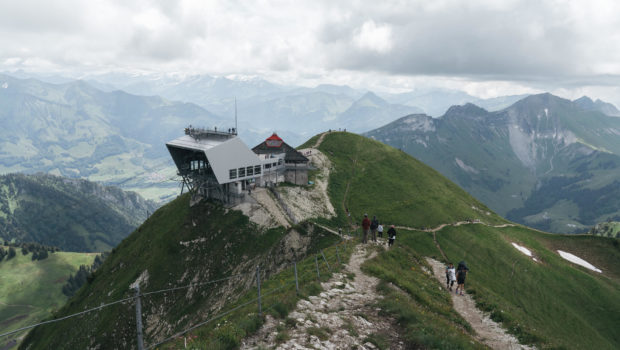 The Moléson is an emblematic mountain of the Fribourg Pre-Alps offering a prime hiking destination. Culminating at an altitude of 2002 m, the Moléson is very recognizable by its shape and its central position in the Gruyère region. The Moléson attracts many tourists every year because of its easy access. Since 1998, a 90-passenger funicular has been running to Plan-Francey every 20 to 30 minutes. From there, a cable car built in 1960 quickly reaches the summit.

In order to discover the beauty of the site, I propose here a route without difficulty and within everyone’s reach. It starts from Moléson-sur-Gruyères and follows a passable track, progressing through the mountain pastures. It then reaches Plan-Francey and branches off on the SuisseMobile route no. 3 “Chemin panorama alpin” and 270 “Sentier de la Crête du Moléson”. The route then skirts around the summit at its northern base and climbs steeper up the slope to the destination.

The panorama offered from the summit is of all splendour and gives the right to observe an impressive number of peaks. One can admire in particular the peaks at the end of Lake Geneva, such as Cornettes de Bise or the Grammont, but also the Jura and the peaks of the Bernese Alps.

The toponym “Moléson” is said to have originated from the mola summum, which designates the summit of a hilltop or a mountain.

From the car park, go past the funicular station to take the direction of the Moléson as indicated by the signs. You will then be on a flat road that runs through the mountain pastures. Shortly afterwards, it passes a chalet on the right-hand side of the footpath. The pathway rises steadily and offers the goal of this walk as a landmark. After a rather steep passage, the track leads to the base of the summit and continues its tranquil progression.

At an intersection, turn right to follow the direction of “Plan-Francey”. The route then heads towards the funicular arrival station, which is also the departure station of the cable car. You then arrive at an intersection with a big sign showing the hiking trails in the area. From there, turn right to go towards the Moléson via route no. 3 and 270. The trail first descends and then flattens out. It is quite hilly and goes around the summit from the north. Further on, you will have to turn left to climb towards the Moléson as mentioned by a sign.

The path climbs quite smoothly up the slope. It then rises steeper, but still steadily. However, be careful on rainy days, as the pathway can be muddy and quite slippery in places. Finally, the arrival station is revealed after a rather steep passage. Continue on the path going straight up in the plain to reach the arrival station and the summit.

From the terrace of the arrival station, follow the sign “Autres directions” to reach the more detailed signpost below. From there, follow the direction of “Moléson-sur-Gruyères — 1 h 45”. The trail runs along the Crête du Moléson. It is safe, as it is secured by barriers. Shortly afterwards, turn left to descend the slope by short bends in the direction of Moléson-sur-Gruyères.

After a rather steep descent, continue straight ahead in the direction of Moléson-sur-Gruyères and leave on the right the path to Neirivue. The footpath then progresses on the hillside. Further on, you arrive at the chalet in Gros Moléson. From there, continue to follow “Moléson-sur-Gruyères — 55 min” (ignore the track on the left going to Plan-Francey). The progression is relatively flat and joins the path on the outward journey to reach the car park.