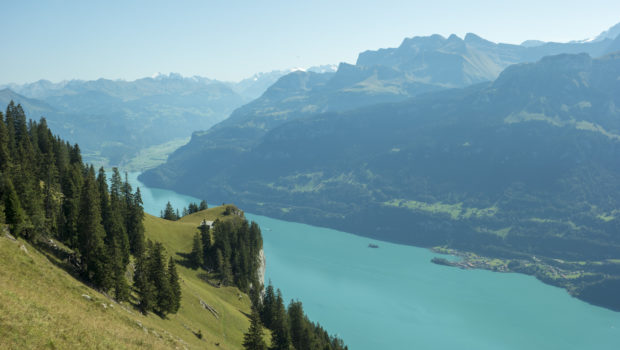 Published on 4 October 2019 | by Pierre-Alexandre

Augstmatthorn is a mythical peak in the Bernese Alps. At an altitude of 2136 m, Augstmatthorn overlooks Lake Brienz below and offers one of the most beautiful panoramas in the Alps. Indeed, you can observe many high mountain peaks, such as the Eiger, Jungfrau, Gletscherhorn or Fiescherhörner.

The outing I propose here starts at the Harderbahn departure station in Interlaken. The Harderbahn is a funicular railway with an average gradient of 64%. It joins the Harderkulm restaurant and its already extraordinary panoramic view of the Bernese peaks. Then, the route continues through the forest to reach a ridge path in the final part of the ascent to reach Augstmatthorn. On the way back, the route descends to Habkern on a path through beautiful mountain pastures after the Lombachalp restaurant. When you arrive in Habkern, you will have to take the Postbus to Interlaken West station.

The course does not present any technical difficulties. Also, the ridge path is not exposed. Only a short descent equipped with ropes after the summit of Suggiture requires some attention in the presence of children or when the terrain is wet.

Go to Interlaken and cross the bridge over the Aare to reach the Harderbahn departure station.

For public transport users, get off at Interlaken Ost. Then follow the yellow signs indicating the direction of the Harderbahn.

At the Harderbahn departure station, buy a one-way ticket for the Harderkulm. Once you arrive at the arrival station, follow the direction of Augstmatthorn, which is a 3.5-hour walk. The route joins immediately after the Harderkulm restaurant on a gravel path. From there, turn right on a small path to climb to Augstmatthorn as indicated by the sign.

The itinerary progresses on a hilly path in the forest. Red and white markings painted on the rocks and trees mark the trail to follow. The track allows you to see Lake Brienz through the trees in some places. Later, you reach an information panel providing details on the natural qualities of the area. Continue towards Augstmatthorn as mentioned by the sign. The trail continues its hilly progression through the forest.

Further on, we then reach a meadow offering an unobstructed view of the summit, which seems very close. Continue towards Augstmatthorn as indicated by the sign. The route is quite rolling in the plain and allows you to rest before the final ascent.

After a short crossing in the forest, you reach the foot of the Suggiture ridge, which seems impressive. The climb is quite challenging on a ridge path with a plunging view of Lake Brienz below. In a penultimate effort, you win Suggiture with your Swiss flag at the top.

Go back and turn right at the sign to follow Habkern’s direction. The path descends quite steeply down the slope and then describes a few bends. Further on, at a crossroads, keep right to continue towards Habkern. A few minutes later, at a second intersection, turn right and follow the direction of Lombachalp and Habkern.

At the Lombachalp Roteschwand restaurant, turn left to progress on the asphalt road towards Habkern, which is 1.5 hours away. After about 800 m walking on the asphalt road, turn right to take the small path to Habkern as indicated by the sign. The route then enters the forest and crosses a river a few metres further on. If in doubt on the way, you must rely on red and white markings. Afterwards, the trail crosses magnificent mountain pastures.

Continue to follow the direction of Habkern as indicated by the signs. The path gets again to a road just before the chalets. Then, it crosses mountain pastures again before reaching a paved road once again. A few minutes later, you will have to leave the asphalt road to turn left towards Habkern.

The route then cuts the paved road three times (red and white markings on the small wooden posts are handy). After a short passage through the undergrowth, you reach a stone bridge. From there, continue on the asphalt road to Habkern Post and finally take the bus back to Interlaken West.

Photos of Augstmatthorn via Harderkulm

Bonjour, Pierre-Alexandre!
I would like to know the level of difficulty of this hike. Why is it difficult? Is it slippery, too steep, areas full of pebbles…? Would it be feasible for people who are generally fit but out of shape, or that haven’t practised sport for a while? Thank you!

Bonjour Agilmar! I ranked this hike as “Hard” because of the distance (15.9 km) and the positive elevation gain (1,210 m) which can be quite daunting for beginners. There are no technical passages whatsoever. As long as the weather is dry, the path isn’t slippery. However, if the terrain is humid or wet, I’d suggest that you pay extra attention on the ridge path just before the summit. In general, the itinerary isn’t very steep, although the final climb before the Suggiture can be quite exhausting. I wouldn’t recommend this hike to out of shape people since it requires good… Read more »