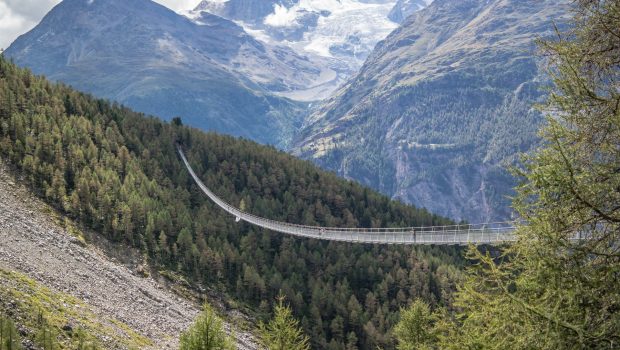 The Charles Kuonen Suspension Bridge (or Charles Kuonen Hängebrücke in German) is located in Randa in the Valais Alps and is a must-see on the Europaweg trail from Grächen to Zermatt. The bridge is 494 meters long, weighs 58 tons and is the longest pedestrian suspension bridge in the world. It was inaugurated on July 29, 2017, replacing the Europabrücke closed in 2010 as a result of the risk of landslides. The panorama offered from the Charles Kuonen suspension bridge is magical with on one side the Weisshorn and the Bishorn surrounding the Bisgletscher and on the other the foothills of the Dom.

The itinerary I suggest here describes a loop from Randa station to the hamlet of Chüebodmen before climbing along the Birchbach river to the Europaweg and going down to the Europahütte, the suspension bridge and the starting point. This route is, in my opinion, much more interesting than the one going directly to the Europahütte, as the loop leads to great pastures away from the crowds of hikers excited to tread the bridge. Although this hike is not difficult, crossing the suspension bridge can be tricky for people who have a fear of heights since it dominates the bottom of the valley by 85 meters and is only 85 cm wide.

From Geneva, take the motorway to reach Sion then Visp. Then drive up towards Zermatt to come to the village of Randa and park in the parking lot next to the train station. For public transport users, take the InterRegio (IR) train to Visp and then change to the Regio (R) going to Zermatt and get off at Randa station.

From Randa train station, follow the direction “Europahütte 2 h 30” as indicated by the sign. The road will sneak steeply through the charming village and make the hiker discover picturesque chalets. After two intersections, the trail divides into two: ignore the direction of the suspension bridge and take the narrow path on the left towards the Europahütte and Chüebodmen as specified by the wooden signs. The trail then traverses a great meadow from which one can observe the village below. After attaining another crossroads where you will find a red bench, leave the footpath on the right going up towards the Europahütte to turn left towards Gere and Chüebodmen. The pathway then passes through the forest to reach further the hamlet of Chüebodmen recognisable by its pasture and its typical chalets. Continue to progress at the edge of the woods and follow the direction of the Europahütte as indicated by a yellow sign. From there, the path becomes much steeper. It then uncovers the Birchbach river and the Hohberge. After a relatively steady climb, you finally come to the Europaweg and a small suspension bridge on the left (which is not necessary to cross, as it is not on the course), culminating point of the ascent at 2327 m above sea level.

Proceed towards the Europahütte located 25 minutes away. The trail runs alongside a balcony and discovers the Weisshorn as well as the Bishorn and the beautiful Bisgletscher. A bench at Miesboden allows for a well-deserved break before the start of the descent. Further on you can see the Europahütte and the Charles Kuonen suspension bridge. The road first reaches the Europahütte, where one must follow the direction “Randa 1 h 20”, and then the suspension bridge after several switchbacks in the slope. Cross the bridge and continue the descent into the forest to return to the village of Randa (or “Randa Dorf”) and to finally reach the station.