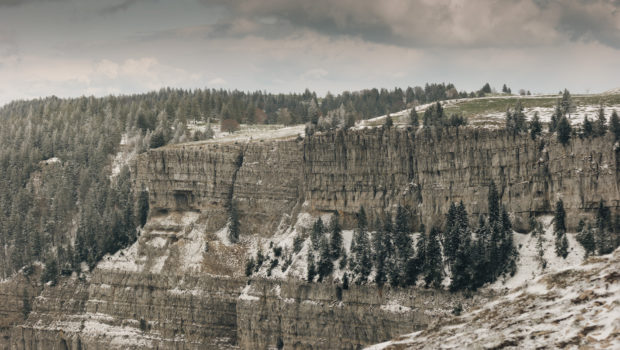 The Creux-du-Van is a rocky cirque located in the Massif du Jura in the canton of Neuchâtel. 1.4 km wide and approximately 200 m high, the Creux-du-Van is one of the most picturesque sites in French-speaking Switzerland with its impressive walls sculpted by the erosion caused 18,000 years ago by a local glacier and its freeze-thaw cycles.

Part of the eponymous nature reserve since 1976, the site is a refuge for many species, such as the capercaillie, the lynx, the Alpine ibex, the chamois and the deer. For this reason, picking and bivouacking is prohibited, as well as dogs that are not on a leash. The toponym Creux-du-Van would have as its origin the Franco-Provençal Van which means “rock” or the Celtic Vanno which means “slope”.

The route I mention below takes the Swiss-Mobile route n° 5 which describes a loop around the Creux-du-Van. One starts at the parking lot of the Fire Department in Noiraigue, joins the Ferme Robert, continues towards the Pré au Favre, and finally follows the edge of the Creux-du-Van before descending to the Restaurant des Oeuillons and Noiraigue by the Sentier des Quatorze Contours (named after its fourteen turns). This outing is perfect for families, as the hike has no difficulties.

However, great caution should be taken with children once you arrive on the trail along the Creux-du-Van; the cirque is not protected by barriers. Therefore, for people who have a fear of heights and for hikers with children, I strongly recommend walking behind the small stone wall, especially when the path is wet, covered by snow or when the weather is windy. In any case, the view of the rocky cirque remains the same regardless of the position of the walker.

Go to Noiraigue. Once at the railway station, continue straight ahead on Rue des Tilleuls. Then turn right on Rue de l’Areuse. Cross the railway and turn left at the first intersection. Then, continue the road, cross the bridge over the Areuse and park on the right on the parking area of the Fire Department. However, if there are no more places available, park the vehicle at the station.

From the car park, take the paved road marked with yellow marks. The road climbs a little up to reach a blue sign announcing the entrance to the Creux-du-Van Nature Reserve. From there, turn right onto the path entering the forest as indicated by the yellow mark, then immediately turn left to “Ferme Robert”. The route now rises more steeply into the woods and then runs along a clearing on the left. The yellow rhombuses painted on the trunks mark the path to follow. At a crossroads with the road, continue straight ahead. At a second junction, go straight ahead again towards “Ferme Robert” and continue following the lozenges and yellow signs.

The trail subsequently flattens and attains Ferme Robert. From there, turn right and follow “Creux du Van – Autres directions”. After you arrive at the nature reserve sign just before the building and the small car park, turn left to follow the yellow arrow painted on the tree. The path rises once more in the forest, and in a fairly steep way. After a relatively abrupt straight line, turn right as signified by the yellow arrow to climb the stairs crossing the road. At a new intersection, turn right to take the road. After about fifteen minutes, turn left towards the “Pré au Favre” as shown by the sign.

The footpath flattens once again. After a long and somewhat monotonous passage, one eventually reaches the Pré au Favre. From there, turn right to take the asphalt road which rises steadily. Then, further on, turn right to the Creux du Van as indicated by the sign. Pass the chalet de la Grand Vy and continue straight ahead to immediately turn right on the pathway going to the Creux du Van. The path now progresses in the plain on very slightly undulating terrain. A few minutes later, follow the arrow and the yellow markings leading to the edge of the woods and ultimately to the Creux du Van.

From there, walk along the stone wall (on the left or right) bordering the cliff, then continue towards Les Oeuillons as mentioned by the sign. After a short descent, turn right to return to the forest and take the Sentier des Quatorze Contours, which descends steeply down the slope. Finally, when you arrive at the Restaurant des Oeuillons, continue straight on towards Noiraigue and eventually reach the car park.

Thanks for sharing the route in detail! Could you please tell me how was the terrain going down? Was it lumpy throughout or was the path levelled?

Hi,
The way down is steeper than the way up, as the path goes through the forest via short switchbacks, proving tricky in case of rain (heavy mud, slippery passages). The pathway starts to get levelled only after the Restaurant des Oeillons, not so far away from the starting point. If you prefer calm and relaxing descents, I suggest that you follow the described route the other way around.