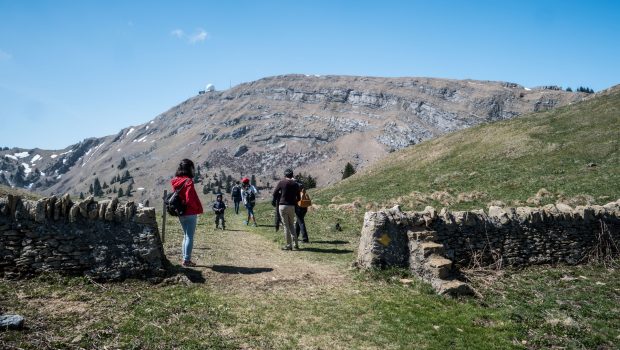 Recognizable by its white ball at its summit containing a radar for aviation and a weather station, La Dôle, whose toponym denotes a “slope dominating a hollow“, remains a classic of the Jura mountains. The panorama offered at the summit gives the right to observe the Mont Blanc Massif and a large part of the peaks of Chablais. The itinerary that I suggest here follows trail no. 5 of Chemins des Crêtes du Jura. Without difficulty, the course goes up in a counterclockwise direction towards the Vuarne and then descends to reach the Barillette and its chalet-restaurant located a little further. Note that the route is feasible in both directions, but I prefer the version proposed here as the approach to the Col de Porte and then the summit is relatively flat.

Reach Nyon and take the train stopping at St-Cergue. Walkers coming by car can park in the parking lot next to the Tourist Office, opposite the roundabout where the route begins.

From the station, follow the direction of la Dôle as indicated by the yellow signs. After passing the church and the roundabout, turn right to follow the trail no. 5 of the Chemins des Crêtes du Jura (green sign) getting to La Dôle in 2 h 20 (the return will be made by the road coming from the left). Follow the paved road along route 123 shortly before the campsite of Cheseaux. Shortly afterward, the route progresses in a first pasture at the hamlet of La St-Cergue and then crosses a first stone wall before a steep ascent reaching the intersection of the Route du Vuarne. Continue on the asphalt road going along a small valley dominated on the right by the Pointe de Fin Château. After a short climb in the grass, you reach a first pass where you can see La Dôle. Turn right to reach the Col de Porte, the final stage of the climb. From there, the panorama is already superb on Lake Geneva and the Mont Blanc Massif. Ten minutes is needed to reach the summit. For people who have a fear of heights, I recommend taking the path on the right passing next to the wooden cross.

From the summit, return to the Col de Porte and turn right to go down to the Chalet de la Dôle. The trail is steep and somewhat slippery in places. At the Chalet, continue in the direction of La Barillette. Then, continue on the paved road to the eponymous chalet-restaurant. After a few curves in the forest, you reach the intersection of the Route du Vuarne. Stay on the trail and turn right into the meadow as indicated by the yellow sign “Tourisme pédestre” to reach a barrier marking the entrance to the forest. The continuation of the route is very well marked until the station of St-Cergue.

Thanks for the write-up. Very helpful. I especially appreciate the note for those with a fear of heights.