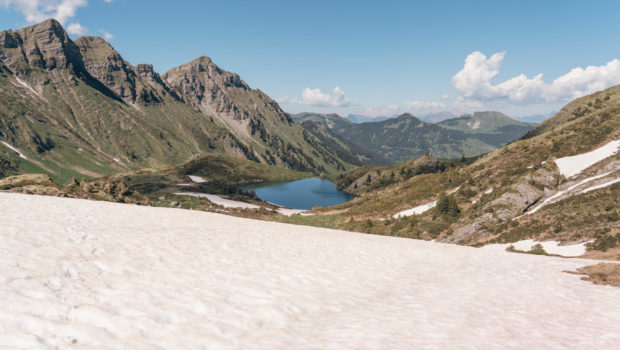 The path runs along the Vièze de Morgins and first reaches the Eau Rouge and its ferruginous springs giving the water a characteristic colour. Then, the route climbs towards the Tovassière and reaches the Col des Portes du Soleil offering an exceptional panorama of Dents du Midi and Dents Blanches. Later, one reaches the Portes de l’Hiver (the highest point of the hike) and begins its descent towards Lac Vert and Lac de Chésery.

The course presents no difficulty, except for its length (16.6 km) which can put off beginners. In summer, I recommend leaving early in the morning so as not to suffer from the warm weather as there are very few passages in the shade after leaving the forest of Val de Morgins.

Go to Morgins and then park in the car park of the tourist office in the centre of the village.

From the car park of the tourist office, cross the bridge and turn right towards the “Sentier des Ponts, They, Tovassière” as mentioned by the sign. The path is flat and runs along the Vièze de Morgins on the edge of the forest as well as a vita trail. A little further on, the path meets the Eau Rouge and crosses the river many times. In case of doubt about the route to follow, yellow rhombuses painted on the tree trunks mark out the progression.

After a succession of wooden bridges, the path leaves the forest and turns left to reach the chalets at the place called “En They” shortly after. From there, take the trail on the left towards “Lac de Chésery – 1 h 35”. A few minutes later, turn left to cross the river and continue towards Lac de Chésery. The path rises quite frankly by wide bends in the forest. Afterwards, the trail joins a relatively flat passable track.

Further on, you will have to turn right when you arrive at an intersection without any sign under the 1624 hill (only a wooden sign on the left side of the road with a mention of a cross on it serves as a landmark). The path remains flat and passes a waterfall further on. It then reaches a grassy plateau and, a few metres further ahead, the chalet restaurant of La Tovassière. From there, turn left towards the “Portes du Soleil – 45 min”. The path rises by short bends. Then, after a relatively straight progression, it describes wide switchbacks (which can be cut) to reach the Col des Portes du Soleil and its magnificent view of Dents du Midi.

The route then goes around Croix de l’Hiver and climbs steeply to reach the Portes de l’Hiver under the clearly visible Pointe des Mossettes with the arrival station of the chairlift. Once at the intersection at Les Portes de l’Hiver, turn right to go down to Lac Vert below. The path then passes the Refuge de Chésery. At a sign, turn right to go towards Morgins. Shortly afterwards you will arrive at Lac de Chésery situated a little further down. From there, continue towards “Morgins – 1 h 40” as indicated by a new sign. The trail then follows a series of short bends to reach the Vièze de Morgins River shortly before “Sassey”.

The way back to the starting point can be confusing at times. Make sure to follow the river and the yellow markings to reach the car park.