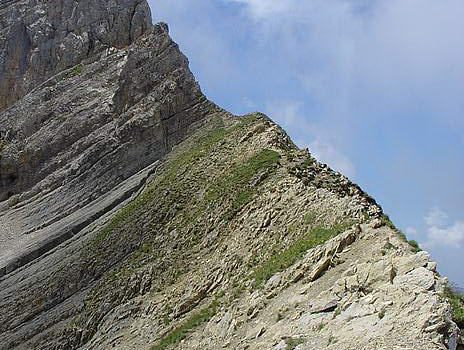 Pic du Jallouvre remains a breathtaking excursion reserved for the experienced walkers. If the beginning of the trail is a charming bucolic walk in the alpine pastures of Cenise, what follows next is quite different: very quickly, the path passes near a vast scree that reaches the Col du Rasoir, which takes its name from the verticality that is present on both sides of the pass; Afterward, you get to the passage of the “Cravate” under the summit that is very exposed to falling stones; Finally, the final ridge of the Jallouvre, which reaches the peak, requires a secure foot, as the track is very exposed.

The date of the hike is essential: the late neve at the passage of the Cravate must have completely disappeared under the risk of fatal fall. On the other hand, the path to the summit being quite dangerous, I strongly advise against climbing if the weather is wet, the trail can prove very slippery. Hikers accompanied by children must stop at Col du Rasoir as any fall is forbidden. Finally, I recommend the use of sticks to descend the scree under the Col du Rasoir, as it is quite tricky.

Note the presence of ibexes when climbing the Col du Rasoir.

From the Frachets, take the pathway accessible to SUV, which leads to the Col de Cenise reached in 25 minutes. From there, turn left towards a small shed. Then, take the track to the right of this shed and descend to a narrower path that joins the base of the foothills of the massif by a vast plateau.
Leave on the right the footpath that leads to the Col de Sosay and frankly turn left towards a grassy mound to the left of the scree.
The path ascends steeply, following the scree to its upper part. The Jallouvre on the right is becoming more and more spectacular.
The Col du Rasoir is in sight, and a final effort in this unstable trail wins it.
The panorama is very extensive on the Aravis Range and closer peaks like Pointe d’Andey, Pointe de Sosay, Rochers de Leschaux and the nearby Pointe Blanche.
After passing the Col du Rasoir comes the passage of the Cravate: you must, of course, avoid stopping at this place since it’s exposed. The footway is well marked and leads to a little mound on the left, which allows reaching the summit by a vertiginous ridge overlooking Lac de Lessy 700 m lower.

Take the same route as the ascent. Note that a detour through the Col de Sosay offers a nice view of Lac de Lessy from another angle; It takes about twenty minutes from the Col de Sosay to get to the lake. The path getting to the Col de Sosay is clearly visible to the left along the scree. Also worth mentioning is the Pointe de Sosay easily accessible and recognizable with its cross at the top.