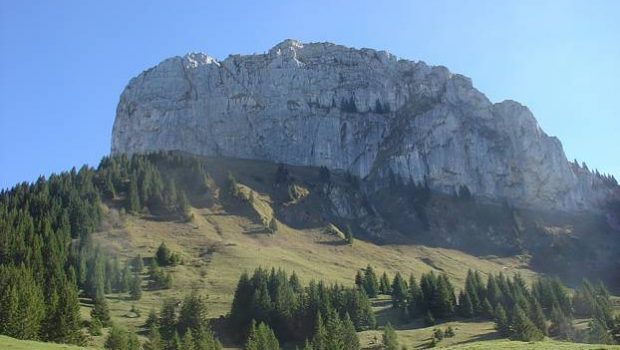 Published on 1 October 2008 | by Pierre-Alexandre

Overlooking the Bornes Massif, Roche Parnal presents itself as an immense rocky boulder between Montagne de Sous-Dine and the Trampes.
Once at the top of Roche Parnal, you will discover a magnificent panorama of all the main peaks of Haute-Savoie. Of moderate difficulty by the Col du Freu described below, the ascent can, however, prove delicate passing by the variant of the Col du Cable: the crossing is carried out using a cable and metal pegs planted in a large curved and smooth slab. I strongly advise not to take it under the wet weather or if you’re afraid of heights.
The itinerary is the same to go to Pointe de Sur Cou until you reach the Col de Petit Cou.

From the car park, follow the forest road in the direction of Chalet de Balme. Fairly quickly, it becomes quite steep and gets into the woods.
At a fork, leave the trail that goes down to the right, and take the one to the left.
Further on, you reach an intersection on a grassy slope.
Leave the track of the left that ascends into the wood, and continue on the one on the right that is rather flat; It winds slightly in the forest and finally ends up on the pastures of Balme where Roche Parnal reveals itself in the eyes of the hiker.
Once at the sign, turn left on the pathway that rises frankly towards the Col de Petit Cou. After the two grassy hills, turn right onto the path marked by the Col du Freu sign.
The road remains flat until the Col de Petit Cou that offers a beautiful view of the Plateau of Solaison and the Haut-Giffre Massif.
Take the footpath indicated by a sign to the right and climb slightly into the forest. A short passage in the rock just before the Col du Freu requires using your hands.
At the Col du Freu, follow to the right the trace in the direction of Roche Parnal indicated by the sign.
The trail goes up steeply into the valley and quickly reaches a first grassy plateau with a panorama of the Mont Blanc Massif.
Note that the path can become very slippery in case of rain. From there, win the summit of La Roche Parnal that is only about ten minutes away.

Take the same path as described above. Note the opportunity, once arrived at the Col du Freu, to make a tour to reach the Col du Câble and go down directly to the Chalet de Balme. Apprehensive hikers abstain!