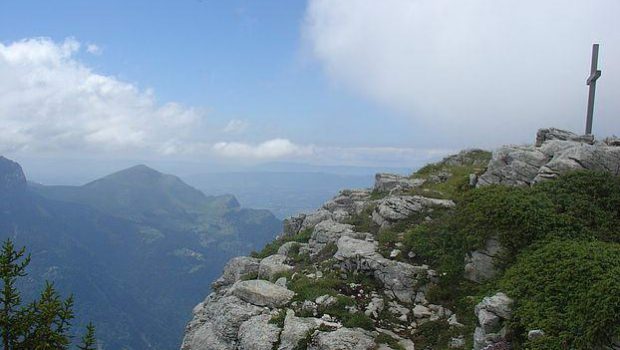 Published on 3 August 2007 | by Pierre-Alexandre

The Tour des Rochers de Leschaux is part of the excursions demanding little effort, but which still require a good physical condition considering the length of the itinerary, as well as a secure foot to get through several steep passages with high declivity (but no exposed passages).
The Rochers de Leschaux offer a superb panorama on the Petit Bornand and Jallouvre.
At the descent, you’ll pass by the Grotte de la Glacière, a very cold cave that deserves a halt.
The route describes a loop that starts at the Col de Solaison, passes by the Rochers de Leschaux, descends towards the Plateau de Cenise, the Perthuis, the Grotte de la Glacière, and finally gains the Col de Solaison by a very steep descent.
The outing is also feasible in the winter. However, it is reserved for people already having a good experience of snowshoe hiking as the course is long. The elevation gain of 510 m is carried out in four hours depending on the conditions with some passages rather abrupt requiring a certain technique especially in case of hard or icy snow.
The terrain formed by lapiaz is dangerous inasmuch as the snow can cover holes; Therefore, be careful and follow the trail.
The winter route begins at the parking lot of the Plateau de Solaison near the cross-country skiing tracks. As some routes might be blocked by snow, it is better to park in the parking lot near the restaurant “Chez Gaston” or in the small parking lot at the previous turn. The pathway goes towards the Rochers de Leschaux leaving Pointe d’Andey on the right. Once arrived at the wooden sign, follow the marked itinerary.

Departure at the Col de Solaison at the terminus of the road, 14 km from Bonneville after Brison.

From the Col de Solaison, at the end of the road, take the footpath in the direction of the “Rocher d’escalade” and the Rochers de Leschaux.
Reach the sign “Leschaux rocher d’escalade” and follow the well-traced track that enters the forest. Soon, the pathway gets steeper and invites to get through rock blocks. Follow the colored marks painted on the blocks that lead to a small pass reaching a path also coming from the Plateau de Solaison.
It is not uncommon to see ibexes in the area. Continue in the direction of the clearly visible cross which materializes the peak.
The itinerary continues through the lapiaz in the direction of the Plateau de Cenise. After a few minutes, you get through a little plateau with creative cairns.
You then reach the Plateau de Cenise and the Planet: follow the sign in the direction of “Solaison par la Glacière.”
After about ten minutes, the road gets to the Perthuis where you will take the trail on the right that goes to “Solaison par la Glacière.”
The footpath becomes more abrupt and enters the forest. The descent along the cliff requires some vigilance: the track is steep, slippery, with very cracked lapiaz and a very short passage alongside a deep chasm.
Continue to the Grotte de la Glacière where a late névé persists.
The path leaves the wood and gains the road leading to the Plateau de Solaison; Follow it for about a hundred meters until it gets to a wide path that heads left to reach the terminus of the road.