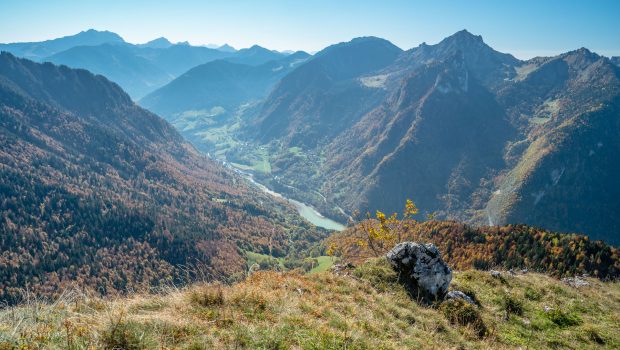 Published on 15 October 2017 | by Pierre-Alexandre

From Thonon-les-Bains, take the D902 road towards Morzine. After a dozen kilometres, turn left on the D122 road to La Forclaz. Follow the direction of Belvédère de Tréchauffé and park on the parking lot of the Belvédère just before the road descends.

Take the path in front of the Belvédère’s parking lot, which quickly rises up the slope with short switchbacks, then further into the forest. At the end of the woods, the cairn marking the summit of Pointe de Saugeon (1445 m) is soon reached. Continue down to Col de l’Aiguille and follow the signs for Pointe de Tréchauffé. The path again enters the undergrowth and winds its way up to a very steep passageway with metal stairs. Without this equipment, the very slippery and steep passage would be really perilous, or even impossible to climb. After a few switchbacks, at the end of the forest, a sign indicates the summit on the right, a few meters from there, and a stopover is required to admire the splendid view of Mont Billiat, the Roc d’ Enfer and a very large part of Lake Geneva. At the bottom, the Lac du Jotty makes it easy to find your way on the map.