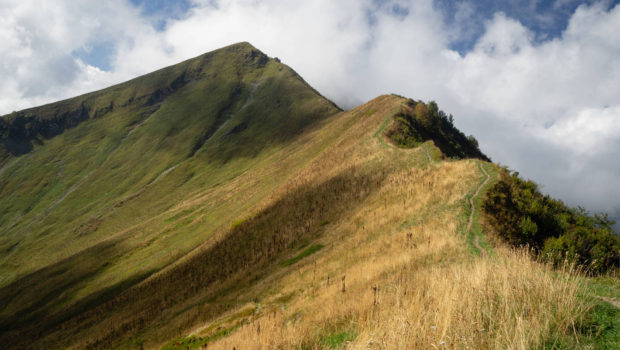 Published on 25 September 2018 | by Pierre-Alexandre

Pointe de Pelluaz is a peak located in the heart of the Chablais massif, south of the Dent d’Oche. Described as peeled or bare mountain by its toponym, Pointe de Pelluaz is a beautiful hiking destination within everyone’s reach. Indeed, despite a cumulative positive gain of 730 m, the only difficulty of the route remains the steep ascent (26 % of average slope) between the Fétiuère car park and the Chalets d’Oche. The itinerary then reaches Lac de la Case at the foot of the impressive Château d’Oche. The ridge path from the Col de la Case d’Oche to Pointe de Pelluaz offers a magnificent view of Lake Geneva and the surrounding peaks of the Chablais. It should be noted, however, that the ridge path can be tricky and even a little dangerous when the ground is wet or frozen (it can prove challenging for people who have a fear of heights). The return is made by a ski slope and a descent into the forest at the end of the walk. It should be noted that it is possible to buy cheeses in season and to get drinking water at the Chalets d’Oche.

From Thonon, take the N5 road to Publier and Bernex. Follow the road to Bernex, then turn left in the village towards “Dent d’Oche”. Continue and park in the parking lot of the restaurant “La Fétiuère”.

The trail starts on the right of the restaurant of La Fétiuère. From the beginning, the path is very steep in the forest on stony and wet terrain. Some rocky passages can be slippery, especially in wet weather. As it comes out of the woods, the trail flattens out and becomes much more pleasant. Further on, one arrives at the Chalets d’Oche where it is possible to buy cheeses in season. As you turn around, you can see the ski slope in the distance where the descent will take place. From the Chalets d’Oche, follow the direction of “Lac de la Case (0 h 25)” which you will then reach at the detour of a block of lapiaz. From there, continue towards “Col de la Case d’Oche (10 min)” and then the Pointe de Pelluaz, which can be discovered by a ridge path. Five minutes later, one wins the northern ridge; it takes about fifteen minutes to reach the summit and its cross. Then, continue in the same direction to descend and rejoin the end of the peak.

From the top, descend to reach the arrival station of the nearby Pelluaz chairlift. Then, follow the ski slope until you get to the Pelluaz Water Retention, which is rounded to the right. Later, we pass the departure station of the Pelluaz chairlift. The descent is less steep towards the Pré Richard farm, which is avoided by a right-hand path shortly after passing under the Petit Combet chairlift line. Then continue on the road and take the small path that goes into the forest. This one leads to the Fétiuère car park about 500 meters further on.

Maybe just a small note here, when you arrive at the bottom of the ridge, just before starting the ascent towards pointe de Pelluaz – the path marker actually does not give any information about pointe de Pelluaz (i.e. all arrows point towarrds the path that follows the “Balcon du leman” path. But eventhough it’s not signposted, the path is well frequented and no issue to follow. It’s not dangerous, but can be impressive for those with fear of high