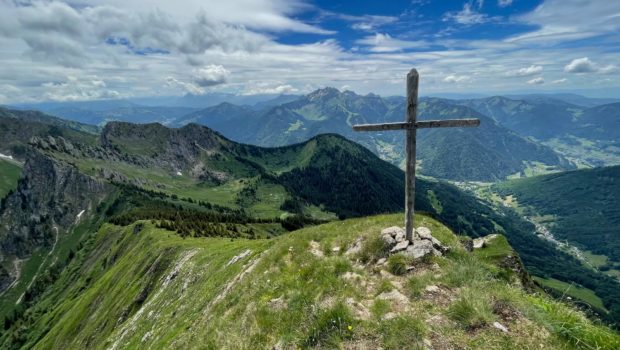 Pic de la Corne is a rather unknown summit in the Chablais massif. From the top of its 2084 m of altitude, Pic de la Corne is nevertheless an interesting hiking objective. Indeed, it offers the hiker a splendid panorama on the peaks of the Chablais (such as Mont de Grange) but also on Lake Geneva and Dents du Midi.

The itinerary I propose is common to the Roc and Lac de Tavaneuse on a good section of the route. There is no difficulty to report except for the significant elevation (930 m) over such a short distance (3.8 km). On the other hand, there are no dangerous passages, except for the part of the ridge located after the cross marking the southern summit (the northern summit about 50 metres away is actually inaccessible; it is useless and dangerous to go there because of the breach). I therefore recommend this route to well-trained hikers. Finally, I strongly advise to do this outing only in dry weather. The ascent of Col de Damoz des Moulins is very steep (average slope of 33%) and wet terrain can make it very difficult to descend.

It should be noted that the hike can be done from the Lac de Damoz des Moulins on the St-Jean-d’Aulps side. For the curious, the toponym Pic de la Corne probably describes a rocky point or an elongated area 1.

Go to the place called “Prétairié” after Abondance and park in the car park at the end of the road.

Take the gravel path that rises gradually along the river. Further on, at the intersection of Dessus la Chargne, turn right at the sign for “Col de Damoz des Moulins – 2 h 00”. The path then becomes much steeper in the undergrowth. After a steady climb, you reach the two chalets of Les Serranants and their mountain pasture. The latter already offers a nice view of Pic de la Corne on the right and the waterfall of the Tavaneuse stream on the left.

Then, continue to advance to reach a wooden fence delimiting the cow enclosure. From there, follow the direction of the “Col Damoz des Moulins – 1 h 30” located just opposite. The path flattens out considerably. A few moments later, turn right to go towards the “Col Damoz des Moulins – 1 h 25” and the eponymous combe twenty minutes away. The path continues through a magnificent meadow strewn with many dandelions. The path then skirts the fir-covered knoll on the right that could be seen from the previous intersection.

Further on, you reach a signpost indicating the Combe de Damoz des Moulins. From here, turn right to go towards the “Col de Damoz des Moulins – 1 h 05”. The path climbs very steeply via short switchbacks below the pass in sight. The effort is sustained until the pass where a well-deserved break is necessary.

The descent is made by the same route as the ascent.