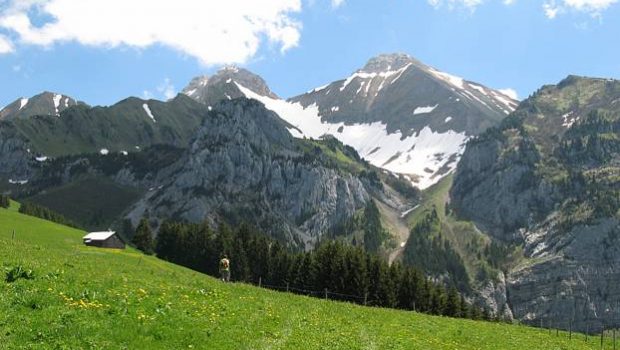 Lac de Lessy (via the Petit-Bornand)

The Lac de Lessy, the goal of this hike, is nestled in a combe at the foot of the Jallouvre, the Buclon, and Aiguille Verte. This itinerary located under the Plateau de Cenise is accessible to all and is easier than the one described by the Chinaillon because it is shorter and less steep.
It takes a very easy pathway in its first part, then rises more steeply in the combe under the Jallouvre until the Col de Sosay by a short exposed passage. Then, a descent brings you gently on the shores of Lac de Lessy. Be careful, due to a landslide in the valley, the path leading to the pass is very damaged and slippery in wet weather; It is therefore strongly recommended to carry out the outing only in dry weather. Given the exposed and steep nature of the trail, it is not advisable to take children under ten years of age.
Note the presence of numerous ibex and chamois in the first part of the ascent.
The Bargy Massif is also the territory of the vulture, which is not uncommon to see spinning at high altitude.

Get to the Petit Bornand by the D12 road. In the center of the village, turn left in the direction of Cenise (wooden sign) and continue this small way (in places very steep with a succession of tight turns) until reaching a first little parking lot. The road is no longer paved over 200 m but proceeds to reach, 500 m further, another car park a little wider.
The trail starts to the right of this car park.

From the car park, take the pathway on the right that rises smoothly in the alpine pastures; Follow it to a first chalet, inhabited in the summer, located at the edge of some trees.
After a short descent that rapidly arrives at a group of small chalets, the route climbs more frankly along a cliff very appreciated by the climbers.
The path then rises in a combe to reach a plateau on the bottom of the Jallouvre. From there, continue the footway, which, after describing a left turn, gets to a pond.
From there, take the track damaged by the landslide that runs along the mountainside and get to the Col de Sosay at the end of the crossing by a short exposed passage.
The arrival at the pass reveals Lac de Lessy huddled at the foot of Aiguille Verte. Follow the downhill trail that leads gently to the Chalets de Lessy overlooking the lake.

Take the same road as described above. Once you arrive at the Col de Sosay, do not hesitate to follow on the right the path that goes on the crest to discover the magnificent view of the valley.

Photos of the Lac de Lessy (via the Petit-Bornand)