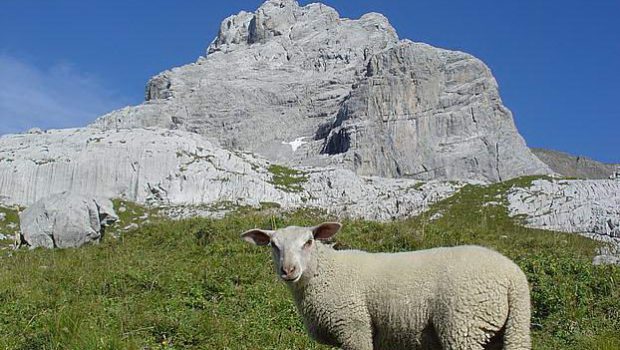 Point Percée, whose toponym refers to a rift in its summit1 is the highest point of the Aravis Massif, at an altitude of 2750 m. For the anecdote, the summit was also called Mont Fleuri in the 19th century.

I propose here two itineraries: the Pointe Percée and the Col des Verts. The ascent of Pointe Percée (red track on the map), because it is indeed an ascent, is at the very edge of hiking and climbing, and goes somewhat beyond the notion of a family stroll. Indeed, the last third of the course, after crossing a fairly steep scree, is a path through passages where the use of hands is essential to climb into faults, bottlenecks and chimneys that are not equipped, on slippery rocks. The insurance of a rope and the wearing of a helmet in case of falling rocks are strongly advised.

The route of the Col des Verts (in blue on the map) is less difficult, but requires some training and attention. It must be said that this route is not for everyone, given the nature of the terrain. Indeed, the progression is practically only on lapiaz or in scree. The indications painted in green to find one’s way through this maze are random, to say the least, and the progression can be a little painful for those who are not familiar with a purely mineral environment. However, the Col des Verts offers a perfect view of the Mont Blanc range on one side and the Bargy massif on the other.

The path for both itineraries is the same and passes through the alpine pastures of the Col des Annes to reach the Gramusset Refuge (Tel.: +33 6 18 27 70 28). It is only slightly after the refuge that the routes separate.

At the Bonneville exit of the A40 Road, take the direction of La Clusaz. After Entremont, turn left towards Villaret. At the entrance of the Grand-Bornand, follow on the right the direction of the Vallée du Bouchet. Follow the road until the end of the road at the Col des Annes.

From the chalets of the Col des Annes, take the signposted road towards the Refuge de Gramusset and the Col de l’Ouletaz. After a few switchbacks, you reach the arrival station of the chair lift at the Tête des Annes.
Follow the pleasant path that rises between the bushes to reach the crest that you have to follow until the Col de l’Oulettaz.
A short steep descent with chains allows continuing in the direction of the first rocks where the trail is steeper and a little more technical.
The roof of the refuge becomes visible: you’ll reach it in about twenty minutes. After a well-deserved break comes the time of the choice of the itinerary.
On the left, the majestic Pointe Percée dominates the scree leading to the Col des Verts overhung by Pointe des Verts.

Follow the red and yellow tracks on the lapiaz and the blocks above the refuge, which goes to the left in the direction of a large scree.
After fifteen minutes of climbing in this maze of blocks, a short ascent allows reaching the bottom of the scree that has to be climbed to gain a small rock bar at the foot of a névé.
The ascent continues on the left after crossing this bar. Follow the red marks that mark the itinerary.
After the passage of several faults and more or less exposed escarpments, a chimney reaches the exposed ridge and the summit.
The descent must be made by the same route.

Ascent to the Col des Verts

Above the refuge, take the path on the lapiaz and follow the green marks that mark the way towards the pass. Very quickly, the track reaches large blocks of stone with green markings that must be followed until reaching the bottom of a vast scree.
The ascent is delicate and very steep in the end to arrive at the Col des Verts.
The effort is well rewarded by a panorama that is identical to that of Pointe Percée, on the Mont Blanc Massif, the Aravis Range, and the Bargy Massif with the Jallouvre and Pointe Blanche in sight.