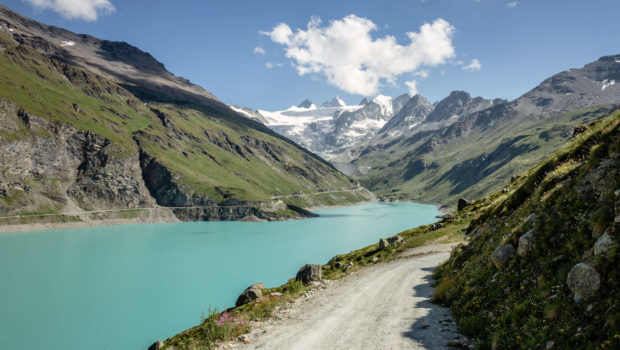 Located in the Val d’Anniviers in the heart of the Valais, under the imposing Pigne de la Lé, the Col du Pigne is the subject of a hike that will surely remain in the memory of the walker in search of breathtaking landscapes. The route starts at the Moiry Dam at 2250 m above the village of Grimentz. With a height of 148 metres and a length of 610 metres, the dam was put into service in 1958 after four years of construction which required approximately 1200 workers. The footpath first runs along Lac de Moiry with its turquoise waters. The lake constitutes a reservoir of 78 million m3 for an area of 1.4 km2. The route then gets to the Lac de Châteaupré with its astonishingly beautiful hues, then climbs towards the Cabane de Moiry to finally reach the Col du Pigne at 3140 m. The way back makes a small detour by the Lac de la Bayenna under the Pointe du Bandon to return to the dam via a panoramic trail.

The route is ranked in the “hard” category because of its length and the nature of the terrain after the Cabane de Moiry. Although not exposed, the path joining the Cabane de Moiry is equipped with chains in the trickiest places. I strongly recommend doing the hike in two days to better appreciate the peaks of the Val de Moiry, such as the Grand Cornier, the Dent Blanche, the Pointes de Mourti, the Tsa de l’Ano or the Couronne de Bréona. The Cabane de Moiry, built in the 1920s, has a new building with a fully glazed dining room offering a splendid view over the glacier since 2010.

Join Sierre on the A9 motorway then go up towards Grimentz. In the village, continue to the Moiry dam and park on the car park just after the tunnel.

For users of the public transport, take the train to Sierre, then change to Car Postal 451 (Vissoie, poste) and change again at the terminus of the line to Car Postal 452 (Moiry VS, barrage).

From the car park, follow the signs for “Cabane de Moiry – 2 h 55” and “Tour du Lac 2250 – 2 h”. Cross the Moiry dam to get to the western shore of the lake of the same name. After about one kilometre, take the trail on the left to “Cabane de Moiry” and “Tour du Lac 2250” going down towards the lake. The progression is made on a flat track along the lake giving the opportunity to discover the Moiry Glacier at the end of the valley. Further on, one reaches Gros Liapec where one crosses a small bridge over the Gougra river. After a few hundred metres, the footpath joins the asphalt road from the dam to Lac de Châteaupré.

From Lac de Châteaupré, continue to follow the direction of the Cabane de Moiry. Gaining altitude, the route proceeds along the eastern moraine of the glacier before descending a little and finally climbing quite steeply into a scree by short turns. Red and white stripes of markings indicate the path to follow. After a relatively sustained effort, one arrives at the Cabane de Moiry CAS at 2825 m where a stop for the night is all recommended.

From there, continue through the rocky maze well marked by cairns and yellow dots on the rocks. The progression can be difficult in some places, the rocks being sometimes unstable. Further on, the yellow dots turn into green dots. A small ledge gives the opportunity to admire the glacier and the Pigne de la Lé. The Col du Pigne is won about 800 metres further after 1 h 30 effort from the Cabane de Moiry.

From the Col du Pigne, return to the Cabane de Moiry, taking the same path as the ascent. If in doubt about which road to take, stop for a moment to spot the green markings painted on the rocks. Once you have arrived at the cabane, continue downhill until you get to the Lac de Châteaupré. From there, follow the direction of Lac de la Bayenna and the “Tour du Lac 2500”.

The route ascends quite steeply up the slope and describes two wide turns before climbing more gently across to Lac de la Bayenna. From there, continue towards Moiry Dam as indicated by the signs to reach a cairn clearly visible from the lake. The narrower trail offers a splendid panorama over Lake Moiry and the surrounding peaks. Further on, one arrives at an intersection where one must turn right on the footpath that goes down (the path on the left goes up into the alp) in order to reach the small Lac du Louché and the alp of Torrent. Finally, take the road down to the dam and get to the car park.

Thanks a lot for the post! I was just wondering what camera you used to take these amazing photos? (Vous avez utilisé quelle caméra pour prendre ces exceptionnelles photos?)