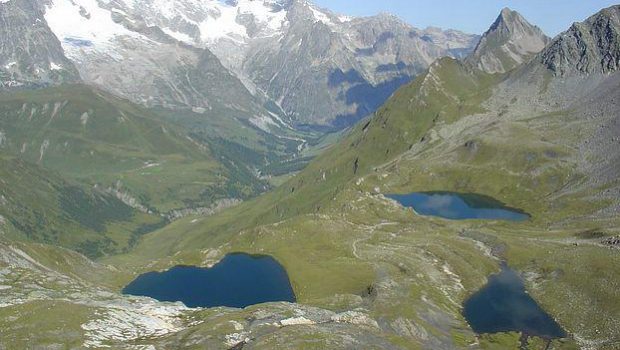 Published on 30 September 2007 | by Pierre-Alexandre

The journey begins in Switzerland, in the canton of Valais, at the Col and Hospice du Grand-Saint-Bernard for a very nice outing. The altitude of the starting point (2469 m) and the highest point of the hike (2775 m) offer magnificent panoramas on the most beautiful peaks of the Swiss, French and Italian Alps.
The itinerary that I propose describes a loop, with the passage of three passes in a “high mountain” setting.
The point of view on Lacs de Fenêtre from Tête de Fonteinte with Mont Blanc in the background will remain engraved in the hiker’s memory for a long time.
I classified this hike in the category “Difficult” because of the length of the route, the high altitude, and a delicate passage before the Pas des Chevaux.
Note the possibility of visiting the museum and the kennel of the Hospice du Grand Saint Bernard, which will allow the children and adults to see the dogs (St-Bernards) and to discover the history of this institution.

From the car park of the Col, continue the road towards the Italian border. The trail starts at the first farms in the direction of the Fenêtre de Ferret. The pathway rises gently through beautiful slopes, and reach the pass by a few tight switchbacks.
From there, leave the track that descends on Lacs de Fenêtre, and take on the right a path that leads to large rock blocks in the direction of the Tête de Fonteinte. The passage of the blocks is easy: only a small turn requires a little attention.
In twenty minutes, the summit is won. A break is welcome to admire the splendid panorama on Lacs de Fenêtre and the Mont Blanc Massif. You can see down the trail the regular footpath that passes near the lakes before turning to the right in the direction of the Col du Bastillon.
The goal is to get to this trail by staying on the right as much as possible. Go down from the Tête de Fonteinte by continuing on the left in the direction of a steep rocky slope. Although very steep, the scree is traversed quite easily: the foot marks well in this crystalline ground, and the descent is carried out without danger until arriving at a path that goes along the majestic cliff to reach the main route.
Then follow the direction of the Col du Bastillon. The footpath approaches the buttresses of the cliff by wide increasingly tight switchbacks due to the steepness of the slope. The effort is sustained to gain the pass and its magnificent landscape. Grand Combin and Mont Vélan are part of this scenery, with, and in the distance, a lake below the Col des Chevaux that is the next objective.

Go down the wide valley by staying on the right to follow the small visible lake, and gain a track on the mountainside to keep altitude.
It is the most delicate part of the itinerary: although safe, the progression is almost flat on this narrow path, which sometimes flirts with very steep slopes. Several steep passages, but without danger, succeed one another on this well-marked path.
A short passage equipped with cables helps to pass through a steep escarpment that requires attention.
Continue the trail that reaches the usual route passing through the bottom of the valley and gets to the Col des Chevaux. This pass is the last climb before starting the easy descent towards the Hospice du Col du Grand-Saint-Bernard and the car park.
A special thanks to Michel Pilloud who made us discover this great walk. I did not know the area of the Grand-Saint-Bernard, and I must confess that I was entirely charmed by the place.