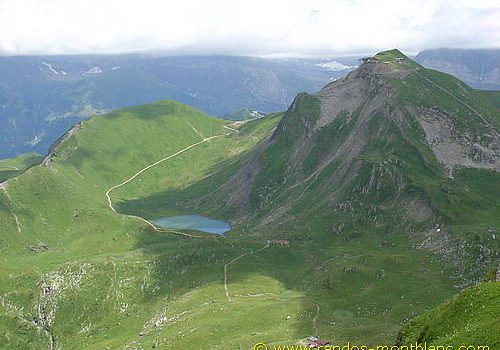 Pointe de Chésery constitutes a breathtaking itinerary that dominates the village of Lindarets in the heart of the Portes du Soleil between Châtel, Morzine, and Avoriaz.
The course presents no particular difficulty, except the last part of the ascent that is a bit steep.

From Morzine, take the direction of Montriond by the D228 road, and continue to the village of the Lindarets that you have to go through by avoiding the goats :-). The car park is on the left, at the exit of the village near the chairlifts.

From the parking lot, turn left on the road going to “Pointe de Chésery” and follow it to a small chalet. Continue to the right of the chalet and leave the trail to climb on the left in the direction of the arrival station of the chairlift.
Once arrived on the ridge, continue to the right in the direction of Pointe de Chésery, clearly visible by the small crest path, which wriggles between the rhododendrons and the small fir trees.
Quickly, the trail becomes steeper in the last part of the ascent to the peak. A sustained effort wins the summit materialized by several cairns.

Take the same route as described above.
A small visit of the village of Lindarets is necessary for those who do not know it, despite the tourists in summer.

Lac and Pointe d’Arvouin
Back to Top ↑