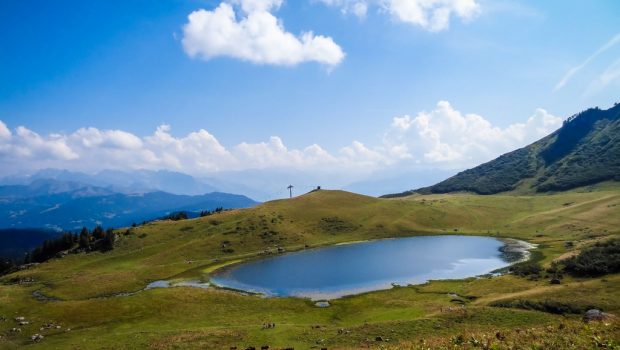 Published on 12 September 2012 | by Pierre-Alexandre

Pic du Marcelly is the obfject of a great hike that describes a loop starting through the pastures of Praz-de-Lys, to continue on the ridges of Pointe de la Couenasse, before ending overlooking Lac de Roy. Formerly ranked “hard” because of the passage exposed to heights at Pas de l’Âne, I preferred to demote the itinerary to “Intermediate,” since it is possible to circumvent the difficulty by taking a path passing under Pic du Marcelly to go up a few meters further. Note that the road on the ridge may be tricky for some people with a fear of heights, despite the presence of a cable during the most exposed passages. Particular attention is required after the rain as the trail can be very slippery in places.

From Taninges, take the direction of Morzine, then turn left at the Pont des Gets towards Praz-de-Lys. The car park is located at the exit of the village in the last turn before the Col de la Ramaz.

The footpath begins on the left of the road towards the Col de la Ramaz. An arrow sign indicates “Lac de Roy 40 min,” a lake that is reached much faster in reality after passing the Chalets de Véran. Arriving at the lake, go around it to the right to win the “Frêtes de Penaille.” The path becomes more exposed and gets to a ridge towards Pointe de la Couenasse. Then, the track divides into two: it is better to take the right one as it’s less exposed. The landscape is magnificent with the Mont Blanc Massif, the Arve Valley, and the slopes of Praz-de-Lys. You can also see the large cross at the top of Pic de Marcelly. One can notice a trail that comes from the left from the bottom of the valley and that arrives at a large block and screes: it is by this pathway you will descend. Now you are very close to the ridge, at the foot of the Pas de l’Âne that is a very tricky exposed passage, but secured by cables. Insurance with rope and carabiner is compulsory for children (as well as for adults with insecure feet). Fortunately, an alternative route circumvents the difficulty by the north face of Marcelly: you can take it on the right 100 m before the cables. After a short crossing, the trail slopes to the right in the direction of the summit.

From Pic du Marcelly, take the same road until you reach the fork on the right. From here the descent is steeper, and the path leads to an intersection where you will have to turn left in the direction of Chalets de Roy. Then, take the trail that goes towards a small bump just after the chalets on the right. Take the same path as described above to get to the parking lot as you arrive at Lac de Roy.