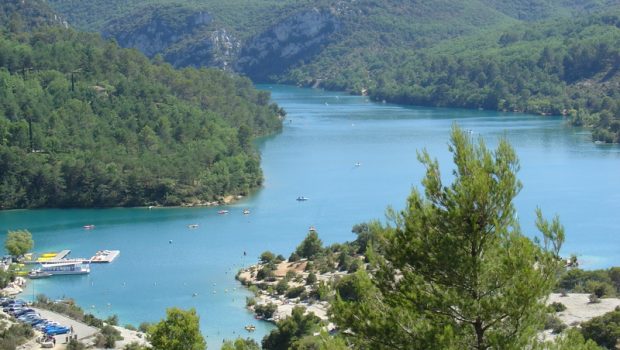 Published on 5 August 2012 | by Pierre-Alexandre

NWe had a wonderful family holiday in the Alpes de Haute-Provence, in the surroundings of Esparron de Verdon, near the Gorges du Verdon, first in July 2005 and then in August 2012.
Here is a summary of the places visited, illustrated by these few photos that remind me of unforgettable memories of this region also conducive to hiking and the discovery of nature still preserved.

I will begin the description by this charming small village of Esparron de Verdon.
Perched in the south of the Gorges du Verdon, 26 km from Manosque, the old village hangs on a rock around the castle, hence perhaps the origin of its name, “esparrar” which means “to slip” in Provencal.
The tower dates from the tenth or eleventh century: it was built to watch the Verdon and collect tolls on the passage of men and goods crossing the river.
This bridge, now submerged under 13 meters of water, was built in 1725 by the village of Arles, which sent its sheep to the Alps. Esparron is situated on the way of transhumance and lived from the passage of the sheep on these lands.

The lake of Esparron de Verdon is located downstream of the Gorges du Verdon and Lake Sainte-Croix.
With an area of 328 hectares, it consists of two large perpendicular basins, bordered by creeks and cliffs. Its calm waters of turquoise blue are easily accessible by canoe or electric boat.

The lake was created in 1967 by EDF. It supplies domestic and agricultural water to 116 municipalities, including Marseille, Toulon, and Aix en Provence.
The depth of the lake at the dam is 55 meters, and the water capacity is 80 million m3.
The lake, nearly 5 kilometers long, extends upstream through the Basses Gorges du Verdon for 8 kilometers up to Quinson.
There is a very wild course to do in a canoe or electric boat.
On the other side of the lake, you can see the old Canal of Verdon. Built under Napoleon III by convicts, it skirted the Verdon and supplied water to Provence. Now dry, it passes under many tunnels from the village of Quinson, upstream of the Gorges up to a pipe where it disappears under the hill in the direction of Aix en Provence.
The alluvial dam, 220 meters long, is 67 meters high above the foundations and has a base depth of nearly 300 meters.
This lake is a real marvel for lovers of fishing, and nautical activities without a motor.

The district of fountains with its washhouse and the Ecomuseum have to be visited as you will discover objects dating from the 18th century, which retraces the evolution of the material and the customs of our ancestors.

The Plateau of Valensole

This plateau is a beautiful landscape with its large fields of lavender intersected by vast fields of wheat as far as the eye can see. You can also see the village of Valensole with well-anchored traditions where smells of thyme and honey mix as you visit distilleries of lavender and the Bee Museum.

The Verdon and its gorges

The Verdon takes its source near the Col d’Allos, in the Massif des Trois-Évêchés (2819 m). It reaches the Durance, near Vinon-sur-Verdon after having traveled nearly 175 kilometers. Its most interesting route is between Castellane and the Pont du Galetas on Lake Sainte-Croix.

This lake was, several decades ago, the vast plain of Salles-sur-Verdon, before the flooding of the artificial lake created by the construction of the dam of Sainte-Croix.

During the rising of the waters in 1973, the old village of Salles was evacuated, sometimes by force, and eventually drowned. Its church was dynamited, and the village rebuilt higher on the hill. The Gorges du Verdon constitutes the border between the departments of the Var in the south and the Alpes-de-Haute-Provence in the North. In some places, at the bottom of the gorges, the two departments are only separated by a few meters. This area, between Castellane and Lake Sainte-Croix, is called the Gorges du Verdon.

The Lac de Sainte-Croix is a summer tourist center and is very popular for water recreation.
This reservoir is the second largest in France by its area (about 2,500 ha).
The navigation of gasoline-powered boats is prohibited on Lake Esparron. Only electric motors and sails are allowed. The lake is used in case of fire.

At the meeting point of the main tourist routes of the Verdon, downstream of the famous canyon, Moustiers, well known to the amateurs of ceramics, presents itself in an astonishing site.

A fault, where a torrent flows, begins the cliff that dominates the city. The two upper edges are connected by a 227 m long wrought iron chain to which a golden star hangs.

This chain was sealed in the rock in the execution of a vow made by a knight of Blacas, returned from a crusade after a long captivity.

Unmissable, the path that leads to the Chapelle Notre Dame de Beauvoir that offers a striking view of the village and Lake Sainte-Croix.

Lovers of faience can make will be pleased by the many shops and workshops of craftsmen.

There are many hiking trails from Moustiers.