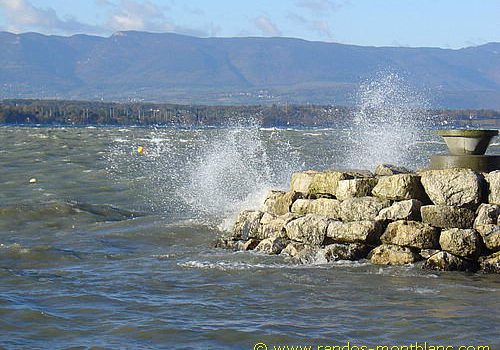 Lake Geneva is often calm and conducive to all water sports, but sometimes when the wind is blowing, it offers an entirely different aspect as shown in these photos taken on November 14, 2004. The temperature of the air was 4°, and that of water was around 9°. The waters became gray as the waves covered the jetties.

First row of photos: Photos taken from the quays of Geneva left bank, at the bottom the Jura;
Second row: Left bank, near La Nautique and the Tour Carrée, Right bank the beach of the Reposoir;
Third row: The quays of Versoix, the waves pass over the jetties.

Crescent shaped, Lake Geneva is a border between France and Switzerland, the northern part of the lake being in Swiss territory and the southern part of French territory. Its key features are:
Area: 582 km2, of which 41% is in France;
Perimeter: 167 km, of which 54 km in France;
Maximum width: 13.6 km, between Amphion and the bay of Morges;
Length: 73 km, from Geneva to Villeneuve;
Average level: 372 m above the sea;
Depth: 310 m, between Evian and Ouchy;
Volume: 89 km3.

Lake Geneva collects the water brought mainly by the Rhone (178 m3 per second).