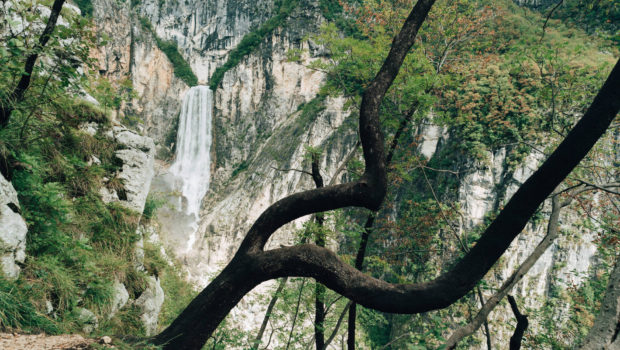 Published on 9 September 2018 | by Pierre-Alexandre

The Boka Waterfall (or Slap Boka in Slovenian), with its 139 metres, is the highest waterfall in Slovenia and is located upstream from the river Soča (also called Isonzo). The waterfall begins at a karst spring and has two levels: a first stage 106 metres high and 18 metres wide, as well as a second stage 33 metres high. During the driest periods, the water flow of the waterfall is about 2 m3 per second, but it can reach up to 100 m3 per second after heavy rains. At the foot of the waterfall, the stream called Boka flows through a steep valley with a stony bottom. The stream flows into the Soča river after less than one kilometre, making it one of the shortest streams in Slovenia.

The itinerary I suggest here follows the upward path west of the Boka to reach successive points of view on the waterfall, the last point of view overlooking the waterfall. Very short, the course does not present any particular technical difficulties, but I have decided to include it in the “Intermediate” category because of some steep passages that can be very difficult in case of rain. In addition, a short passage very slightly exposed on a ledge can impress the most sensitive hikers.

From Bovec, follow Route 203 east towards Log Čezsoški. The car park is located in a right curve just before the bridge over the Boka stream.

From the car park, cross the bridge over the Boka (you are now on the west side of the stream) and turn right in the curve towards “Slap Boka” as indicated by the sign. The progression is made on a stony path along the river. A few meters further, turn left towards “Slap Boka”. The path rises through steps and then turns right towards “Slap Boka”. Then, it flattens out and finally plunges into the forest. The path is equipped with wooden steps in the steepest passages. A first point of view on the right gives the right to admire the Boka Waterfall and to read a sign where you can find more information about it.

Further on, at an intersection, turn right towards “Boka”. Red circles painted on the rocks mark the route regularly. Then turn right to take the path indicated by a red arrow; you will then reach a very slightly exposed but safe ledge. The path goes back into the forest and then leads once again to a cornice where a magnificent panorama of the waterfall awaits the hiker.

Continue to follow the red circles. The trail is quite steep and can be tricky in wet weather. A little further on, one reaches a small clearing and a cabin. Then, the path goes down a little to reach the last point of view on the waterfall.

Take the same path as described above. In wet weather, do not hesitate to use your hands in the steepest passages.