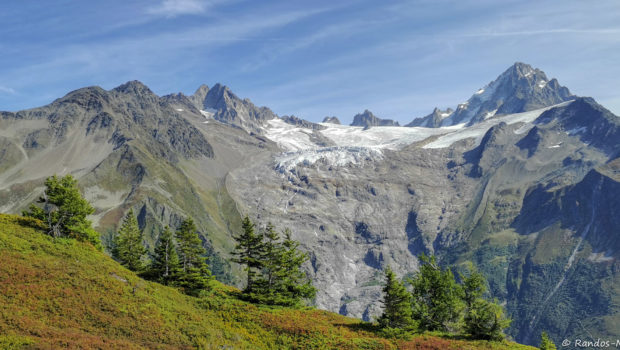 Published on 16 October 2019 | by Pierre-Alexandre

Aiguillette des Posettes is a classic of the Mont-Blanc Massif. Located at the eastern end of the Chamonix valley, Aiguillette des Posettes is a choice hike that will delight both young and old. The panorama served at the top is one of the most extensive in the massif. Indeed, you will can observe in particular the Aiguilles Rouges, the Buet, the Glacier du Tour, the Refuge Albert 1er as well as the Emosson dam.

The itinerary I propose here describes a loop starting at the car park of the ski lifts in the village of Le Tour. This one joins Aiguillette des Posettes by a path in the forest and then on the plain in its second part. On the descent, the return is first made on a safe ridge path before returning to the forest to reach car park. It is also possible to descend by the path taken on the way up.

From Chamonix, head towards the Col des Montets. Pass the village of Argentière, then take the small road on the right that leads to the village of Le Tour. Park on the large ski lift parking lot.

The start of the itinerary is located in the gravel parking lot on the left when you arrive at the village of Le Tour. The path, which is well marked, rises gently to a first intersection where you must follow the direction of Aiguillette des Posettes (the other path being the return path). Very quickly, the path sinks into the forest, and is always well traced and marked. As you leave the woods, the trail becomes steeper and discovers the village of Le Tour, the Col de Balme and the lifts of Charamillon and Les Autannes. Once you have passed the commemorative plaque, the landscape is completely unobstructed on the Mont-Blanc Massif and the Aiguilles Rouges.

The path then winds its way between imposing paravalanches that protect the village below. At a crossroads, continue towards Aiguillette des Posettes. The view is totally open and the path runs through a very tight low vegetation composed of blueberry bushes among other things. The trail then splits into two parallel paths that meet to join a vast slate field.

At a new crossing, always follow the direction of Aiguillette des Posettes. The peak is now well visible and well indicated. Once on the ridge, you overlook the village of Vallorcine. In a last little effort, the summit is quickly reached by a slightly steeper path. Going down slightly on the Vallorcine side, you reach the Croix des Posettes and its magnificent sculpted bench.

For the descent, either take the same path, or follow the direction of the Col des Montets to make a loop. I prefer this second option, because the view offered during the first part of the descent is worth a look! The route follows the ridge almost in a straight line on a slightly downhill path. At the end of this ridge, you overlook the Col des Montets and the path that leads to Lac Blanc.

Thereafter, the slope increases very sharply and stairs facilitate the progression. It is necessary to be careful to follow the direction of the village of Le Tour otherwise you will end up at the Col des Montets. Later, the descent into the forest takes place through short, fairly steep bends. Very visible roots can also be very slippery in wet weather! After crossing a wooden footbridge, you reach the path of the ascent and the parking lot of the Tour.