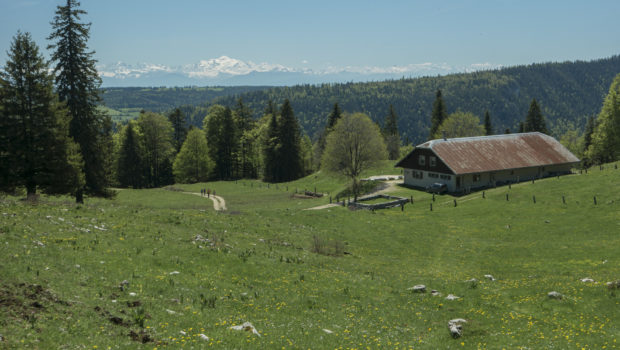 Highest point in the Doubs department, Mont d’Or is a peak of the Jura Massif. Located a few miles from the Franco-Swiss border, Mont d’Or naturally stands out as the perfect location for a beautiful family hike with its panoramic view of the Lake Geneva Basin, the Alps and the nearby mountains, such as the Suchet and the Dent de Vaulion.

The excursion I propose here reaches the summit from Vallorbe by taking the SchweizMobile route n° 123 “Balade du Mont d’Or”. Without any technical difficulty, the itinerary passes first through the “Sentier des Planètes”, then climbs into the forest of the Côte de Pralioux, joins the mountain pasture of Pralioux Dessous and the chalet of Pralioux Dessus, arrives at the Cabane du Mont d’Or before gaining the eponym peak. Although the trail is not technically challenging, it is ranked in the “Intermediate” category. Indeed, the path is quite steep in some places, especially shortly before Pralioux Dessous and Pralioux Dessus where the average slope of the road can reach 20%.

Attention, the site being part of a wildlife reserve, dogs must be kept on a leash. Besides, since the route traverses on two occasions mountain pastures where cows graze, it is recommended to keep a certain distance from the animals, in particular when they are accompanied by their calves.

Several hypotheses remain as to the origin of the toponym Mont d’Or: some suggest that the name refers to the “water mountain” or the “spring mountain”, while others highlight the golden colour of the massif at sunset.

Go to Vallorbe. The start of the itinerary is located at the intersection of Chemin du Réservoir and Rue de la Gare.

Take the Chemin du Réservoir which climbs quite steeply and passes under the railway track. A yellow sign marks the direction of Mont d’Or. Follow the asphalt road that shortly after joins the reservoir. A little further on, turn right to get down on the “Sentier des Planètes ” as shown by the sign. This trail, which loses a little altitude and then flattens out, allows one to observe the village of Vallorbe below. The yellow diamonds painted on the trees and the information panels on the planets of the solar system mark the route.

After about fifteen minutes of walking, one arrives at a first intersection with the tarred road and the vita parcours where one will turn left towards the Mont d’Or as mentioned by the sign. The progression is now carried out on a slightly hilly slope. At a new crossing with the paved road, walk straight ahead as indicated by the yellow markings. After a good climb, the footpath crosses the asphalt road one last time, which this time must be followed. Continue towards Mont d’Or and the eponymous cabane.

The road rises quite steeply in some places. Finally, one reaches Pralioux Dessous and its charming alpine pasture. From there, turn right to continue in the direction of Mont d’Or. Then, a little further on, turn left to enter the forest again. After a further steep passage on the asphalt road, one arrives at the alpine pasture of Pralioux Dessus. At the chalet, turn right towards Mont d’Or.

The trail is now progressing in the meadow. After a short ascent, you can see the Cabane du Mont d’Or on the right of the path. Pass the fence and turn right to follow the direction of Mont d’Or situated 25 minutes away. Continue on the grassy plateau to finally reach the “true” summit of the Mont d’Or materialised by a cairn (at 1,463 m). To benefit from another point of view, I recommend walking to the point located at 1,461 m not far from the car park (after the mast).

Take the same path as the one described above. Nevertheless, it is possible to stay on the tarred road all the way to Vallorbe. In this case, when you reach a pin to the left at the 902 m altitude, continue straight ahead to take the path marked with the sign mentioning “Excepté exploitation forestière”. This footpath is actually the one left during the ascent when it forks off towards the “Sentier des Planètes”.

Photos of Mont d’Or (from Vallorbe)