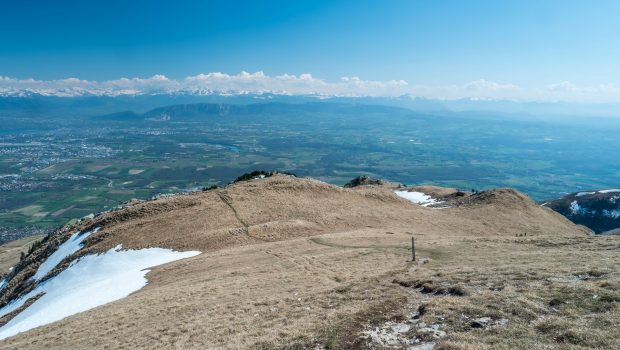 Published on 9 April 2017 | by Pierre-Alexandre

Crêt de la Neige and Reculet constitute a superb balcony on Lake Geneva and the peaks of the Alps. The itinerary that I propose describes a loop that begins in the forest to reach the foothills of the Massif before ascending further to win the Crêt de la Neige, the highest summit of the Jura Massif.
The return journey passes through the Reculet, a very recognizable peak with a metal cross at the top, which was carried on the back of men.
I also suggest an another itinerary for hikers who wish to climb the Reculet only.
This ramble is hard because of its length and difficulty, especially when descending, as the stony trail to get back to the parking lot requires a lot of attention.
The descent can put off some. There are no technical or exposed passages. With luck, you can see some chamois very present on the crests.

Go to Thoiry located between Sergy and St-Jean de Gonville. From there, reach the Tiocan and its car park in front of the belvedere.

For public transport users, take the bus Y from the TPG towards “Thoiry, Val Thoiry” and get off at “Thoiry, mairie” stop. The Tiocan is reached in about 30 minutes: from the stop, retrace your steps and follow the road turning to the left indicated by the sign “Le Tiocan.” Then, on the right, take the trail going up fairly steeply in the forest that will lead you to the parking lot in about fifteen minutes.

Take the trail to the left of the large building in the Tiocan car park and go straight into the forest. Leave to the right the path indicating “Reculet par la Beule.”
After a short ascent, you get to a gravel road rising steeply in the wood. Much of the elevation gain is made in this forest where it is not uncommon to meet young chamois.
Now come the junction with the stony road that you have to follow until you reach La Croisée (1,190 m) where you turn right towards Le Reculet and leave on the left the Chalet of Narderans.
The progression is rather abrupt up to the outlet of the forest: from there, the cross at the top of the Reculet is clearly visible on the left.
Proceed on the trail until you reach a junction that invites you to follow, on the right, the direction of the Crêt de la Neige. Then continue to a crossroads to follow left towards the peak.
After a rapid ascent, the trail reaches the GR of the Tour de la Valserine, which leads to the first objective. The route becomes steeper and wriggles among the hooked pines, a curiosity of the area, before reaching the Crêt de la Neige.
After a pause to admire this magnificent point of view on Lake Geneva and the Alps, it will be necessary to turn back and head towards the Reculet keeping the cross in sight.
The path quickly gets to the base of the Reculet: you win it after a short ascent.

For the descent, you have to go through the meadow from the Reculet. After a steep descent, you reach two circular water tanks and the itinerary going to Crêt de la Neige. Proceed to the car park.

Ascent to the Reculet only

Take the trail to the left of the large building in the Tiocan car park and go straight into the forest. Leave to the right the path indicating “Reculet par la Beule.”
After a short ascent, you get to a gravel road rising steeply in the wood. Much of the elevation gain is made in this forest where it is not uncommon to meet young chamois.
Now come the junction with the stony road that you have to follow until you reach La Croisée (1,190 m) where you turn left towards Narderans and Le Reculet.
Continue on the path overlooking Geneva and the Alps. The pathway sneaks further between rocks and climbs more steeply to reach a grassy plateau and Chalet du Narderans located on the left. Continue the path rising between rocks. After a relatively steady ascent, you reach the foot of a rocky spur offering a beautiful view on the Salève. A final effort under this spur makes it possible to reach the summit in about fifteen minutes.

Two options are possible for descent:

Photos of the Crêt de la Neige and the Reculet