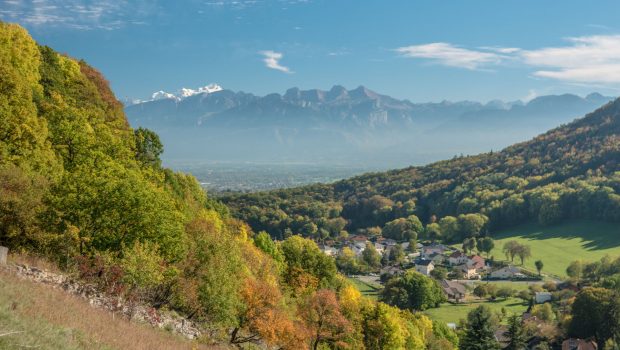 Published on 13 October 2017 | by Pierre-Alexandre

The Salève is an emblematic summit of Haute-Savoie and the Geneva Basin, offering the walker a panorama of choice on the vast majority of the peaks of the region, as well as on Lake Annecy and Lake Geneva. A quick look at the map shows that several hiking routes are possible in order to climb the Salève. The easiest route (apart from the express ascent by cable car) is the one taking the Orjobet trail over Collonges-sous-Salève with a cumulative gain of 730 m for a return distance of 6.2 km. However, for hikers looking for a more challenging outing, I propose here a variant starting from Etrembières and reaching Monnetier before getting to the Salève’s cable car and the Observatory a little further on. The route goes through “Sur les Voutes” to reach Monnetier, as the “Sous les Voutes” option can be dangerous due to exposed passages in certain places.

Go to Etrembières and park in the parking lot next to the cemetery. The D906a departmental road being closed to traffic between 2 October 2017 and 8 January 2018, it is preferable to park at the Shopping Etrembières shopping centre parking lot. From there, just follow the road, cross the bridge over the motorway, turn right at the roundabout to go towards the village and finally turn left onto Chemin de la Chapelle just in front of Chemin des Îles.

From the car park of the cemetery, take the Chemin du Château in the direction of the Salève’s cable car and the Observatory, then turn right into the forest at the curve. The path is a little steep and reaches further away the water point of the Source des Eaux Belles. The path is then narrower and will go down and up to reach the intersection of “Sur Les Eaux Belles” where you will have to turn left towards Monnetier by “Sur les Voutes”. Shortly afterwards, ignore an orange arrow going to the left and continue on the path leading to a new bifurcation at “Sous les Ches” where you have to continue straight on towards “Monnetier – centre”. After a fairly flat passage, you arrive at the meadows of Petit Salève offering a magnificent view on Monnetier, the Mont-Blanc Massif and Les Bornes. From there, go down towards the church of Monnetier and continue to follow the direction of the cable car and the Observatory. The route continues on a steep asphalt road to reach a path in the forest. The progression is regular and crosses the D41a road four times before joining the Salève’s cable car. Continue to move towards the Observatory and the Croisette. A little further on, the route will take you to the starting area of the paragliders and then to the observatory, which can be recognized by the antenna. Move on the plateau towards the Croisette. After a small ascent, the path reaches the great meadow of Salève. Continue to finally arrive at the panorama of the Alps where the hiker can observe the multitude of summits of Haute-Savoie.


Photos of The Salève (via Etrembières)